Lifetime's 'A Deadly Adoption': Is the Joke on Us? 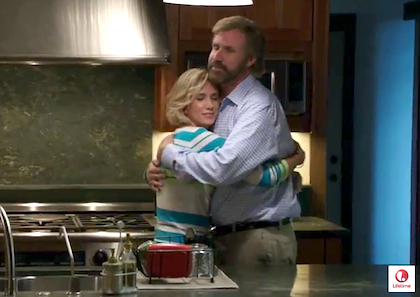 Like most moms, my mom loves Lifetime, and like most sons… I love/hate it. You can pretty much sum up most of their movies with a few different plot lines all told from the POV of the film’s female protagonist, who is always a wife, recently divorced, or widowed single mother:

4. “My daughter is having the worst Christmas and is losing her mind and talking to a cat! How can I save Christmas? The cat might know!”

Finally, Lifetime gets something perfectly right by casting comedy juggernauts and SNL alumni Will Ferrel and Kristen Wiig in the Lifetime original film A Deadly Adoption, which falls under Category #2 from the Lifetime Standards above! Without spoiling anything else for you, I want to show you the deadly trailer first so you can see what we will be dealing with here:

That’s right, they are playing this completely effing real… AND I COULDN’T BE HAPPIER. I have high hopes for this one, folks. It isn’t the first time that Lifetime has delved into comedy, but it’s shaping up to be something entirely new and different. It’s got everything that a regular Lifetime needs and everything that everybody else in the country wants, so it’s a win-win for all viewers involved. If you’re living in a major city or near a freeway with billboards, then you have also seen that Lifetime is dropping a pretty penny to market A Deadly Adoption, complimented with completely serious pictures of Ferrel and Wiig, like they’re promoting an actual Lifetime movie. 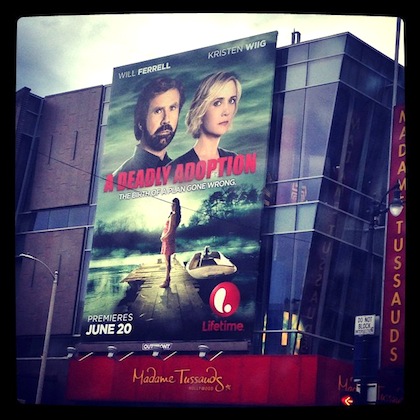 The main mystery going on here, though, doesn’t have to do with how A Deadly Adoption will unfold its plot -- it has to do with how Lifetime got Ferrell and Wiig to agree to this. Is this really for real? Or is it an elaborate joke? Is Lifetime in on the joke? I suppose we'll have to wait and see!

As far as the movie’s plot goes, let’s be real… we all know it without having to see it. The girl that moves in plots to kill Wiig and take Ferrell as her husband, it turns out that she isn’t really pregnant, thus giving Wiig the perfect excuse to kill her in self-defense, until Ferrell doesn’t turn out to be so sweet and decides to kill all of Wiig’s loved ones and co-workers, just before Wiig realizes that Ferrell is a thoughtless jerk and she should kill him… then Grumpy Cat comes in to save their daughter’s Christmas.

So ditch your friends and make tonight one for your mother. Grab her quick, tell her you’ll get the red wine if she pops the popcorn and DVRs A Deadly Adoption on Lifetime!