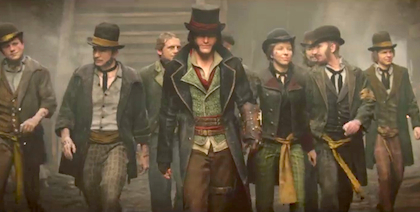 Los Angeles is host to a lot of crazy cool stuff. It’s America’s dream factory where many of our movies are either produced or conceived, but something other then movies swept the city this past week. No, not Obama -- We’re talking about the annual video game convention Electronic Entertainment Expo, AKA E3. (Who doesn’t love abbreviations??) This is the time of year where all of our soon-to-be new most favorite and new most-hated video games are unveiled. The convention took place this past Tuesday through Thursday, so let’s take a look at what all the different video game companies like Nintendo, Mircosoft, Sony, Bethesda, and many more unveiled!

Let’s start off with Bethesda, who showed off a couple of new sequels in the works. First off, they had Fallout 4, which is going to have a real-life Pip-Boy included! A Pip-Boy is an in-game device that is like a smartphone watch built for the Hulk. What makes this special edition-only gadget, well, special is that it will act somewhat like a tablet and give gamers a second screen experience. Also on deck is a brand new Doom game, and Bethesda hinted at it sharing some similar brain-bashing brutality as another nostalgia act that was recently released called Mortal Kombat X. It will also include sharable player created levels.

Microsoft came out and did a bunch of apologizing for not treating its customers the best they think they can, so now they revealed that they will patch Xbox Ones with software to play Xbox 360 games, as well as releasing more indie games then ever before.

Sony came out with no apologies to give and instead just showed off a slew of new videos games on deck, like the much-anticipated and sought-after The Last Guardian. Another game that really sparked interest with the listening crowd was Horizon: Zero Dawn, which is a game set very far in the future after the world is completely destroyed by us living today. In this post-post-apocalyptic world, you play as a tribal warrior fighting off robot dinosaur creatures. (I hope this character doesn’t live off gears and microchips.) And Sony is even developing their own version of Oculus called the Morpheus Project Kit! Way to go, Sony!

Nintendo had a lot of fun stuff to put out to the world; unfortunately, though, no mentions of Nintendo Land… but Star Fox Zero was announced! It’ll come out for the Wii U and will really utilize that technology, thus making it a very fun flying game. Another new game from Nintendo is Super Mario Maker, which, if you have no idea what it is, could actually mean anything. In this case, it is a Super Mario game that allows you to make your own levels. (Seems we’re seeing a possible trend with these make-your-own-level games. Are these developers getting lazy or getting smart?)

Ubisoft revealed For Honor, a swordfighting game that will allow you to actually launch, block, and counter attacks with body-recognizing technology. Reviews have been great for For Honor, but it might be a while before any of us normal folk see it. Ubisoft does, however, have Assassin’s Creed Syndicate coming out soon, which, if you haven’t seen the trailer, you’d swear it’s scary how real it looks. Take a look:

Virtual reality games are quickly becoming a thing through Sony’s Project Morpheus Kit. Capcom is cashing in by making another Street Fighter game that has fans excited but speculating that the game’s original creators could find disturbing. Another game for the kit is London Heist, a cool concept for a game in which you mainly ride shotgun in a car taking out enemies trying to stop you from your heist. The game may not sound too exciting, but apparently, when you’re playing it, you are locked in and having a jolly ol’ time in London, which may cause you to skip multiple visits to the loo.

Then, finally, EA rolled out the red carpet for the game I really can’t wait for: Star Wars: Battlefront. I love Star Wars and I love the Battlefront game series. Now with better graphics and gameplay, the game is described as a love letter to fans. It will take you deep into your favorite battles from the original trilogy and cuddle you like a blanket of laser blasts and Millennium Falcon rides. Look out for that to hit stores in time for Christmas this year.

That’s it for this year’s E3 round-up. I hope you found something here you like and can’t wait to play. Until your new favorites hit the shelves, have fun playing your old Xbox 360 games on Xbox One!