Lexus vs Hendo: The Hover Board Race Is On! 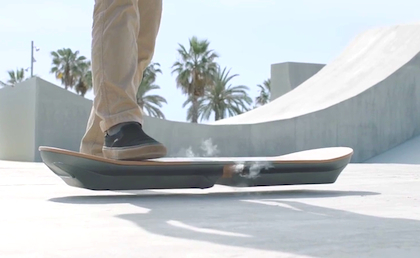 Since the late-'80s, we have all waited patiently for the hover boards promised us in Back to the Future: Part II. In my case, being born with three days left in the '80s, I’ve been burdened with this neverending need for a hover board my entire life. Not long ago, a new company called Hendo appeared on the scene with a crowdfunding campaign insisting that they had the technology to make our dreams happen. They even showed Tony Hawk how to ride one! We can safely say it got two talons up from the Hawk!

With Hendo’s release date of October 21, 2015 (the day Marty McFly went to the future in in Back to the Future: Part II) fast approaching, Hendo may now have a rival competing with that release date… Lexus!

Wait... What? The feet didn’t even ride it! And what does that text about "nothing being impossible" and "it’s just about figuring it out" exactly mean? I guess it means that Lexus is still trying to figure it out. It has been revealed that they are using magnetic levitation technology, just like Hendo, but unlike Hendo, we don’t know when it will be out, or if it is ready for testing.

I will say this, though -- Lexus’s hover board does look a lot cooler and sleeker then Hendo’s, but the smoke bellowing out of it scares me... and also gets me excited for the danger it might evoke. It truly looks more like the one McFly rode way back in the late-'80s-that-was-actually-2015. What’s on deck next for our not-too distant future from Back to the Future: Part II? Well, the Chicago Cubs might just snap their curse and win the world series. Go Yankees!