Catching Up With: Drake Bell 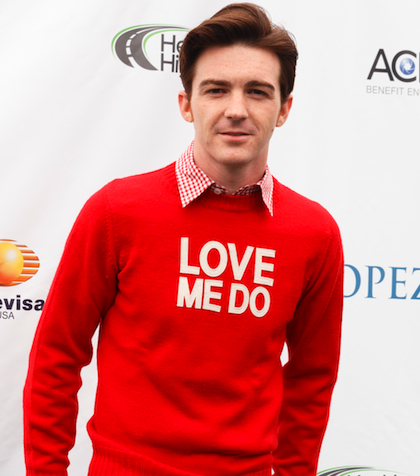 The release of Lionsgate’s Frog Kingdom is nothing but a “hop, skip, and a jump away”, and we got the scoop from a little froggy the Kingdom likes to call Muscles. However, we just like to call him Drake Bell!

You’ve seen him as Drake on "Drake and Josh", you’ve heard him as the voice of Peter Parker in the "Ultimate Spider-Man" series, and you've no doubt jammed out to his retro-inspired music, but now you get the chance to watch him in a much different, well, greener setting.

Frog Kingdom is about a female frog on a mission to counter her father’s plans for marriage. Princess Froglegs, voiced of Bella Thorne, goes undercover to compete in her father’s Froglympics in order to avoid being married off to an undesirable frog. Other voices you’ll hear in the film besides Drake and Bella include the hilarious Rob Schneider, Gregg Sulkin, Keith David, and Vine sensation-turned-actor, Cameron Dallas.

Here’s what Drake has to say about his experience with voice-over work and his character(s) in Frog Kingdom. Plus, find out what’s next for the actor, musician, AND men’s clothing designer!

YH: You’ve done quite a bit of voice-over work in your career.  What is your favorite part about doing voice-overs?

YH: Is it more difficult for you to get into character when doing a voice-over vs. physically playing the character on screen, or is it something that just comes naturally to you?

DB: They’re both just so different, it’s hard to say! For example, when you're running through a field on-screen, you don’t have to think about what noises you would make you know? You just do it. But then when you’re in a booth, and you’re just standing there and they’re like, "okay, you need to climb up this latter and jump across this building," you actually have to think about it. And then each sound needs to be different, whether you’re getting kicked in the stomach or punched in the face, so they’re not constantly the same.

YH: What do you generally do to prepare for a voice-over role?

DB: For a new character, you go in and you get to see what the character looks like, and you’ve read the script, so you know what and who the character is. Then you talk with the producers and directors and figure out a voice. A lot of preparation is done right there in the room. You’re kind of figuring it out as you go along and as the character develops.

YH: Tell us more about your character in Frog Kingdom!

DB: So, I actually play two characters. I play Muscles, the big muscle bound frog. He’s kind of like a big bodyguard kind of guy and just a friend of the other frogs. He gloats a lot and thinks that he’s going to win the Froglympics because he’s the strongest frog. And then I play the announcer for the Froglympics, which is really fun to do because I get to be this loud, fun guy.

YH: What did you like most about playing these roles?

DB: You try to find what a frog is going to sound like, and it was really funny to me in session, because I was thinking, "Okay, he’s probably going to talk out of the back of his throat," and then I started talking and I was like, "Wait a minute, I’m just doing Kermit the Frog… I can’t do that!" Haha! But, you know, just kind of developing that and sounding like a frog… without sounding like Kermit. It was fun!

YH: What an awesome cast – there’s Bella Thorne, Rob Schneider, Cameron Dallas, Keith David... what was it like to work with all of those talented people on the film?

DB: It’s awesome! I’ve known Bella for a long time, and I met Cameron a while ago at the Billboard Awards, so we’ve known each other, and then I’ve done some films with Rob. I really love taking on these [voice-over] jobs because the casts are always awesome! For example, I’ve worked with Jane Lynch, and I absolutely loved getting to work with her. Working with all of these guys, though, it was just really cool.

YH: If you can pin-point one thing, what is it that brings this film to life?

DB: I think it’s definitely the voices. I mean, you are watching frogs… so, you know, but it’s the voices and acting and even the writing. A lot of the writing is actually done in the room, so it’s really spontaneous and improvisational. You get a lot of great in-the-moment stuff.

YH: If anything, what kind of lesson does this movie teach?

DB: The main frog in the movie thinks, to win the games, you have to be the biggest, fastest, and strongest frog, and then he realizes that he just needs to be himself. So, the moral here is really just about being yourself and not trying to be something you’re not.

YH: You’ve done so much in your career, from acting and music to voice-overs and, recently, men’s fashion. What are you most excited about right now and/or for the future?

DB: "Spider-Man" just got renewed for a 4th Season, so right now I’m really excited to be working on that again. And then I have a men’s fashion line that is about to launch sometime soon. I partnered with my dad’s company, Mens.Discount, and created my line called Drakesters. It’s just a lot of cool stuff at a reasonable price, and actually there’s a logo art contest right now that fans can enter for the chance to have their logo designs on my clothing designs.

So, there you have it! Be sure to check out Drake and the rest of the talented cast in Frog Kingdom AND Peter Parker in the next season of "Ultimate Spider-Man"! And just in case you artistic people out there haven’t already, go enter his Drakesters contest for a chance to have your designs put to awesome use.

The action-filled and funny Frog Kingdom is set to release June 30 on DVD, Digital HD, and right in your living rooms On-Demand.