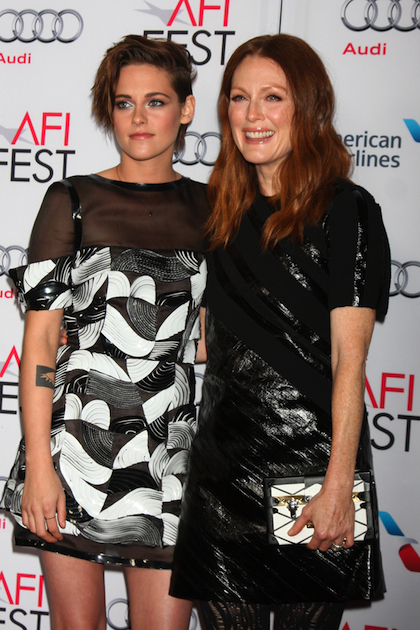 Many people make the erroneous assumption that Kristen Stewart is one-trick pony, an actor that can only play one tune... an emotional tune, that is. However, she is bound to change minds after the research she did for her newest role.

Stewart and Julianne Moore are starring in a new, crazy emotional movie called Still Alice, which is set to release in January of next year. Moore plays Alice Howland, a happily married, well-known linguistics professor who suddenly starts to forget words (the film sounds so touching already). After she receives a devastating diagnosis, Alice and her family, including daughter Lydia (Stewart), will be put to the ultimate test.

Cue tears. I hate watching movies that make me cry! The film description has intrigued me, though, so I’ll probably suck it up and go see it... Sounds super intense, right?

Well, Stewart thinks so too. The actress spent a lot of time with an elderly Alzheimer’s patient suffering severe dementia to prepare for her role. She described her experience with the woman in an interview and it sounded so inspiring, especially because she only had a few moments with the woman actually being “there” with her.

In the interview, Stewart said, “She was quite old, so it made sense that she wasn't fully with me. But I knew, for a second, that she had been dropped into her body, and I was like, ‘Oh my God, this is rare, and this is very brief.' I really held on to those few seconds, and I really appreciated it.” What an amazing moment to be in.

Later in their meeting, they were all having dinner together when the patient tried to talk to her family. Her family just spoke over her, and this didn’t sit well with Stewart.

Stewart continued: "I felt instantly that she has so much to offer, and she might not be able to cognitively explain how she's feeling, but she's feeling so much. I had a connection to this subject. I judged harshly people who couldn't deal."

It’s so crazy, yet so cool to see Stewart come to the defense of this woman she barely knew.

If this doesn’t get you excited for the film, then I don’t know what will. Since we have until after New Years Eve to wait for this film to release, you can watch a clip from the film where Stewart asks Moore what it feels like to have Alzheimer’s.