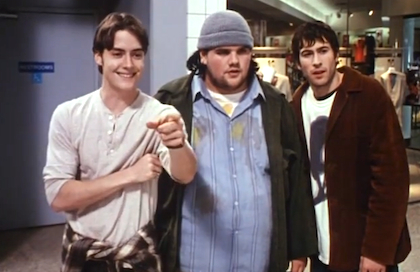 People often forget that, beyond the fat jokes, fart jokes, herb jokes, and sex jokes, Kevin Smith is actually quite a talented filmmaker. The man has proven time and again that he knows how to weave a tale. My personal favorite of his films is Clerks, while most of my friends tend to go back and forth between Dogma and Chasing Amy. As far as his other flicks go, the reaction tends to be mixed here and there. The point is, Mr. Smith has quite a unique filmography, and the one flick of his that everyone seems to agree is just a fun movie in general is Mallrats.

Yes, some of the most beloved characters from the View Askewniverse are making their way back to the silver screen, and there’s not a damn thing anybody can do about it. Well, at least this is what everyone assumes. We don’t know exactly what the story is going to be, but I’m sure that most of the original characters are going to be back. I love Mallrats and all of its raunchy goodness, but it’s not really a film that lends itself to “thematic” sequels. At the very least, though, I can almost guarantee one thing: regardless of whether or not Mr. Smith confirms, a mall will be featured in this flick at some point. And so will Jay and Silent Bob, for that matter, because a Mallrats sequel would be a tepid thing indeed without words like “snootch” and “nootch” flying through the air. Oh, and on the off-chance that Kevin Smith is reading this, I’d like to humbly make a request -- When you bring Brodie back (played by Jason Lee), can you please have at least one scene with him and his cousin Randal (played by Jeff Anderson)? You have written quite a few great characters in your time, but Brodie and Randal are by far the funniest and they have never shared a damn scene together. Sure, it would be the meeting of two great egos and that could be disastrous, but that also sounds like it could be the recipe for something pretty damn hilarious. But it’s Kevin Smith’s film at the end of the day, so I’ll just slink slowly out of the kitchen and let him do his thing.

It was only a few years ago that Mr. Smith was going to hang up his filmmaking tools and ride off into he sunset with an eternity of Q&As and podcasts for him to look forward to. But his passion has been reignited, and now he’s got more projects lined up than... than... I got nothing. The man is very busy, let's leave it at that. We all knew that Clerks 3 was going to be gracing theaters in a few years, but the Mallrats announcement sort of came out of left field. Bored internet citizens will immediately accuse him mining his past work for financial reasons, but recently Mr. Smith made it known that he was making the film in honor of a friend of his who had passed away. This friend, James Jacks, was apparently a huge fan of Mallrats and championed a sequel for years and years. And since Mr. Smith is still feeling the effects of the creativity bug that bit him, he decided to honor his friend by giving the world the sequel that he always wanted to be made. Quite frankly, Kevin Smith could’ve declared “Just because” as his reason for making a sequel to Mallrats and I would’ve been onboard. As I previously stated, the man is a proven storyteller time and again, personally, I’m very interested to hear and see what he has to say about these characters and this world again.