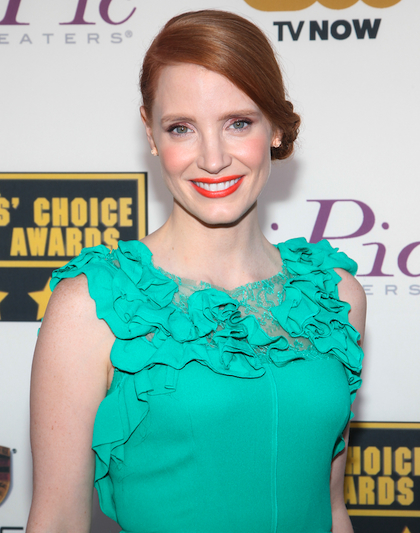 Hollywood's boundless fascination with Marilyn Monroe doesn't show any signs of ending soon. The troubled beauty has been immortalized in books, film, and even in murals along the streets of Los Angeles. She’s about to be brought to life again -- this time by Zero Dark Thirty actress, Jessica Chastain.

Chastain is set to star in director Andrew Dominik’s film, Blonde, a biopic focused on the elusive star. Dominik has been at the helm of quite a variety of unusual films, including Killing Them Softly and The Assassination of Jesse James by The Coward Robert Ford. The project has been in the works since 2010, back when Naomi Watts was attached to star. Dominik is adapting the script from Joyce Carol Oates's historical novel of the same name, and Brad Pitt’s Plan B production company (which just walked away with an Oscar for 12 Years a Slave) will serve as producers for the film. The novel Blonde portrays Monroe’s life in novel form, and mixes elements of fiction and nonfiction.

I’m quite excited to see Chastain portray Monroe. She brought the ditzy yet lovable Celia Foote to life in Taylor Tate’s film, The Help, which viewers and critics alike couldn't help but notice smacked of the late blonde bombshell. Chastain is clearly able to bring a certain vulnerability to her characters that I haven’t seen as many actors pull off, which will be key to play Monroe -- she was the epitome of sensual vulnerability. And we already know that she makes a great blonde!

Chastain was nominated for an Oscar for her role in The Help; it's likely her turn as Marilyn could bring the same fate.

Are you excited to see Chastain play Marilyn Monroe?