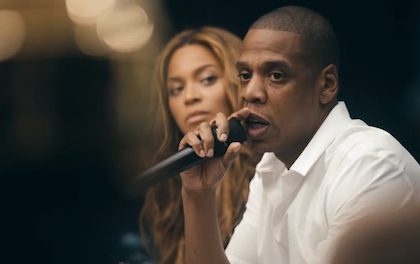 Jay-Z is many things -- a rapper, Beyoncé’s husband, and an entrepreneur, which is a fancy French word for “good with money and investments.” Jay-Z’s latest business venture is in a new music streaming service that launched back in October called TIDAL.

With Tidal, Jay-Z is hoping to achieve more in the quest we are all on: The Search for More Money. How can Jay-Z make money off of TIDAL? Well, like its predecessors Spotify and Pandora, TIDAL has an extra kick to it -- it puts an emphasis on their HD sound quality, access to music videos, an offline mode, tailor-made recommendations, and a playlist option to create and sort out all of your favorite artists, albums, songs, and music videos, among other things.

But what else is going to set TIDAL apart from services like Spotify and Pandora? First off, you’re going to have to pay for it, but the second part of having to pay for it brings in so much more than you would’ve thought. Remember when Taylor Swift took her music down from Spotify and everything but her music videos from YouTube? (Yes, I follow what T-Swizzle is up to… deal with it.) With a paying subscription service like TIDAL, artists that either have or will follow in Swift’s steps will be looking to exclusively go through this service. Thirdly, the payment can be done through iTunes Billing service, so you really don’t have to do much and can cancel at any time. Fourthly, with Jay-Z at the helm of this now, it’ll only attract more artists to join.

Speaking of which, he has already attracted more artists to join him as part-owners. You might spot some of your favorite musicians here, which include Coldplay, Rihanna, Daft Punk, Alicia Keys, Calvin Harris, Jack White, Madonna, Usher, Arcade Fire, Deadmau5, and, of course, Jay-Z’s first lady herself, Beyoncé… or is he the first man?

If you think you’re ready to check TIDAL out, it’s already up and running, so you can sign up today and get yourself a free trial. Still not sure how you feel about it? Take a listen from the musicians behind TIDAL for yourself:

What do you think? Sound off in the comments below!