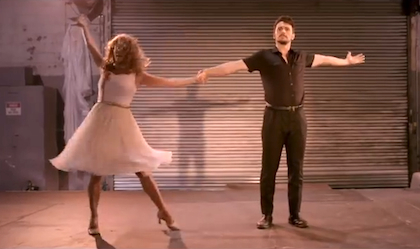 We all know that James Franco is a very busy man. He acts, writes, directs, creates music, paints, teaches, and now he is mashing up all your favorite movies with the help of AOL. In a webseries that he stars and produces in called “Making a Scene”, Franco spins a wheel and mashes up either two movies together (ex: Reservoir Dogs and Dirty Dancing) or a movie and a different genre (ex: Taxi Driver as a Buster Keaton-style silent film). So get ready to enter the hallowed halls of Franco’s production company Rabbit Bandini Productions, which looks like the inside of a rather large Brooklyn apartment...

2. Here’s Jimmy!: Have you ever watched The Shining and thought, “This is one of the best romantic-comedies of all time!”? Of course you have. The problem is that this Stanley Kubrick masterpiece isn’t a romantic-comedy; it’s actually a pretty gruesome horror movie, so enjoy Franco’s take on The Shining as the romantic-comedy it was originally meant to be.

3. BatJuice:Michael Keaton and Birdman director Alejandro Gonzalez Inarritu aren’t the only ones who remember Keaton playing Batman over twenty years ago. In this scene, Franco brings two of Keaton’s most iconic movie characters together!

4. Silent Taxi Driver:Martin Scorsese made a masterpiece in the 70’s that solidified his and Robert DeNiro’s careers in film forever, Taxi Driver. Although receiving many awards and acclaim… what if Taxi Driver was actually made at the wrong time? Join James Franco as he wonders what would’ve happened if Taxi Driver was made in the days of Buster Keaton and Charlie Chaplin. But I guess now we’ll never know if main character Travis Bickle’s reflection was indeed talking to him...

What’s in store next? Well another “Making a Scene” of course. This time James Franco will be mashing up Wayne’s World with Titanic. Can’t wait for that one to be released in its entirety. It feels like something obvious that nobody has ever attempted before. Also, catch James Franco and good buddy Seth Rogen teaming up to take down Kim Jong Un on Christmas day in The Interview.