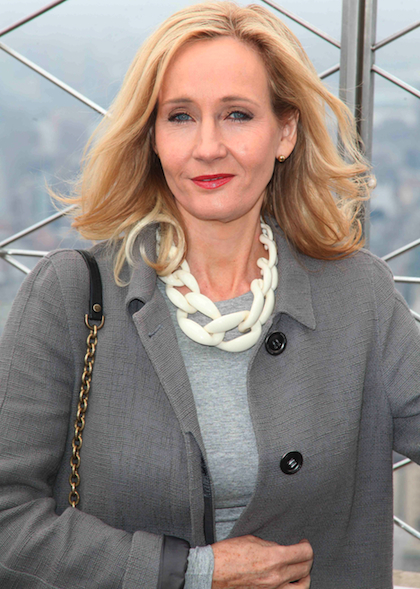 Recently, J.K. Rowling woke up and gave herself a hard look in the mirror. The Harry Potter author was so overcome with grief and guilt over something she did years ago and knew it was time she owned up to it. So, like every responsible human being today, she took to Twitter to apologize to the people. Here’s what she wrote:

Today I would just like to say: I'm really sorry about Fred. *Bows head in acceptance of your reasonable ire*

Fred Weasley was one of the more gutwrenching deaths from the Harry Potter series. It’s described that he “died with the ghost of his laugh on his face..."

A fan not too keen on Rowling’s apology retorted with:

@jk_rowling What about Tonks, Lupin ?

.@Brieuc26Rankin I thought I might apologise for one death per anniversary. Fred was the worst for me, so I started with him.

There you have it; Rowling will apologize for at least one death a year. Will she ever apologize for killing off Voldemort? Hopefully, because I was really pulling for that guy. But the real question here is, will any other authors will follow in her footsteps? Let’s take a look at some authors that should own up already and account for what they’ve done.

I get it. The deaths in his A Song of Ice & Fire book series (on which "Game of Thrones" is based) are completely justified to move the plot forward, but why Robb Stark? At a wedding no less?? You’re a villain, GRRM! We the fans deserve an apology for something so uncalled for… Then again, you did take out Joffery at his own wedding before he could consummate it, so we'll call it even.

Joss Whedon, AKA Not An Author

Well, an author of FILMS anyway. Whedon killed off many beloved characters in his shows "Buffy The Vampire Slayer" and "Angel", such as Tara, Anya, Doyle, Jenny Calendar, Fred Burkle… the list goes on. However, Joss Whedon, it’s about time you apologize for killing off Wash from “Firefly” in the motion picture Serenity. You’re very funny with the way you kill most people, and yes, I did laugh at this one, but come on! Uncalled for, man! He flew in space wearing a Hawaiian shirt, playing with plastic dinosaurs, and had a wife that’s in better shape than him and could protect him from any physical harm… Wash is my hero and you killed him! But I do love your work. You’re awesome, Joss Whedon.

Stephen King, AKA The Horror King of New England

Mark Twain, AKA The Dead One

Listen up, Twain, if that really is your real name! (It's not.) I don't care if you were born in the 1800s and died 105 years ago. That just means that all of your characters that I grew up reading about, like Tom Sawyer, Huck Finn, Joe Harper, the sultry Becky Thatcher, and Jim, have undoubtedly died of old age. You are the worst of them all, and the rest of the world and I are eagerly awaiting your reanimated corpse or hologram to rise from the ground, adjust to society by not being afraid of computers or smart phones, figure out Twitter, and make a public apology in 132 characters on the internet like a real man! By the way, you’d probably be awesome at Twitter. (But thanks for killing Pap Finn. What an abusive drunk.)

Is it likely that any of these authors (and one screenwriter) will apologize for what they’ve done? Not likely, although I would hold my breath on zombie Twain sending some tweets. But J.K. Rowling, thank you for your effort. It is much appreciated, and we look forward to what other body bag(s) you take liable for next year. Now let’s see why we’re all here in the first place:

(Somehow the movie made this less gruesome.)