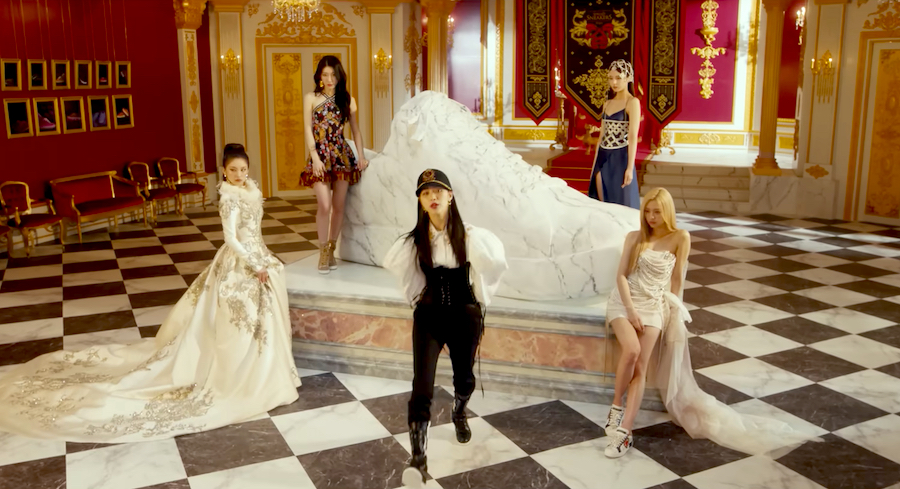 ITZY, the 5-member K-Pop girl group signed to JYP, just released another mini album titled Checkmate. Yeji, Lia, Ryujin, Chaeryeong, and Yuna return once again with their unique blend of melodies to give us seven new songs. “Sneakers” is just one of them on the album and the official single. It’s a song that has some fans scratching their heads at first listen because, well, it’s about footwear.

Or is it? The music video shows members smiling as they dance with sparkly sneakers on, but they’re also portrayed as royalty. An important contradiction!

Here are some moments that prove Itzy is still advocating for fans to always be themselves even as they sing about lacing up a pair of sneakers!

The “Sneakers” MV has ITZY in a ballroom with checkered floors. They are queens in a game of chess as shown by their signature crown hand gestures. The queen piece is the most powerful one in a game of chess, after all, as it can move in any direction.

Shots of members dancing are spliced with Yeji as an actual monarch. She’s wearing a puffy dress complete with a Elizabethan neck collar and high heels -- and she’s not happy about it. From what we can see, she’s being told what to do, signing and nodding when needed. That is, until Lia enters the throne room. Her path is lined with knights in shining armor as she draws close to Yeji and presents her with a golden pair of sneakers.

You might be thinking, “Okay, so she doesn’t like heels?”, but the heels-to-sneakers metaphor is outlined more clearly in the lyrics. “I'll go my own way (Oh) / I don't need order / Don't need no guidance, I'm makin' my way.”

The sneakers are what make Yeji comfortable. They are a sign that she’s embracing who she is even if it’s unconventional because they're part of her "own way". She doesn’t want to be told by the people around her what to do because a Queen is already the most powerful piece on the board.