Is a "Game of Thrones" Movie in the Works? 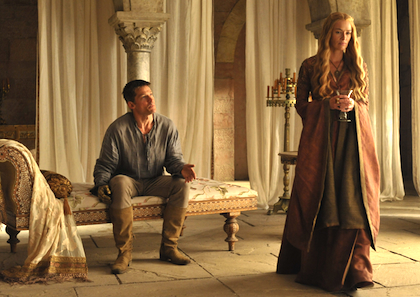 Have you ever watched “Game of Thrones” and wished that a certain storyline or backstory would be expanded on? Or are you a fan of the book series who laments certain characters or plots being axed from the show altogether?

Are you a fan of both and ever thought that the epic HBO series would look AMAZING on the big screen?

Well, both of you may be in luck, because if a recent comment by “GoT” alum(?) Charles Dance is to be believed, we could be seeing a “Game of Thrones”-inspired feature film in the near future!

According to Dance – who played the not-so dearly departed patriarch Tywin Lannister – in an interview, there has definitely been “talk” of a movie, based on author George R.R. Martin’s as-yet unfinished A Song of Ice and Fire book series. It must be true; Tywin wouldn’t lie to us.

Apparently, though, the “talk” he mentions refers to exactly WHAT the film would be about. Anyone familiar with either the show or books is aware that there is NO shortage of characters or storylines to pull inspiration from. If the feature film is being handled by the same people as the series, though, we can expect that the film will follow show-canon.

What, then, might they have in mind for a feature film? Who can say – I mean, nobody but showrunners David Benioff and D.B. Weiss know how the rest of the series is going to play out… and I mean NOBODY. Not show-watchers, book-readers, or even GRRM himself, as the series has strayed considerably from the source material in the last couple seasons. If the feature film were to take place within the same time frame as the TV series, then I could see them perhaps making a film out of the Ironborn storyline. Book-readers know what I am talking about – there is an entire plot involving Theon Greyjoy’s uncles (Euron, Victarion, and Aeron) battling for control over the Iron Islands after their eldest brother Balon (Theon’s dad) dies that has been cut from the show completely. Which, in my opinion, is a shame, because that is actually one of my favorite storylines in the series.

A more likely possibility, though, is that the film would be a prequel highlighting some major event prior to the War of the 5 Kings. The most obvious choice would be Robert’s Rebellion, the event that put King Robert Baratheon on the Iron Throne in the first place. It would be great to see some Targaryens other than Daenerys (or her tool brother Viserys, may he rest in peace), especially the dashing and heroic Prince Rhaegar, who is practically a mythical figure at this point. It would also be cool to see younger versions of “current” characters from the series, like Ned Stark, Catelyn, Jaime & Cersei, etc. Of course, if they do go this route with the movie, they would have to blow the lid off the whole R+L=J theory, wouldn’t they? (Look it up if you don’t know what that means… or not if you’re spoiler-phobic!)

Personally, I wish they’d do an entire movie about Sansa and The Hound, but I’m weird like that.

Speaking of, check out our interview with Sansa herself, Sophie Turner, from this year's Comic-Con below!

What do YOU guys think the movie could/should be about?