In Memory of Robin Williams 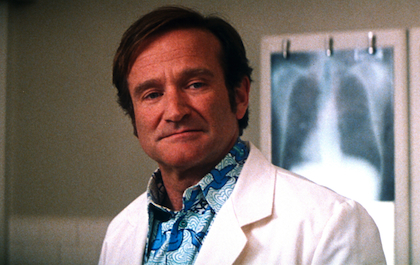 When I was nine years old, my beloved Uncle Rip died. The last time I saw him was when he boarded a train back to Washington D.C., shortly after Christmas. I chased down the train, tears streaming down my cheeks, waving frantically at the window, as he blew me kisses goodbye.

The day after I learned that my uncle had died, my mother took my sister and I to see the film Patch Adams. Despite the fact that the film had a more serious slant, I was enchanted by Robin Williams's performance. Everytime he came out wearing a red clown nose or did something silly, I laughed -- and for just a moment, I was relieved of the endless longing for my uncle. Williams made me smile at a time when I thought that I never would again.

We have lost a truly brilliant comedian. It is true irony when we reflect on the fact that Williams, the clown, the one who made us laugh even in the darkest of moments, was not able to bring himself out of his own darkness. We will never know exactly why Williams made the choice that he did, but we will never forget all the times when he lifted our spirits, from donning women’s clothing to portray a doting nanny in Mrs. Doubtfire to transforming himself into the owner of a gay nightclub in The Birdcage, or ad libbing nearly every single line as the genie in Aladdin. We will never forget the laughs, the times when he brought us comfort and joy. And for that, I thank you, Mr. Williams. May you find the joy that you brought all of us.