'Frozen' Going from Screen to Page! 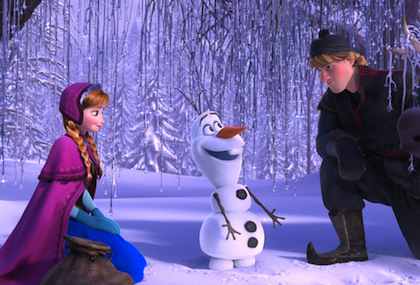 Disney’s smash hit musical film Frozen is getting a sequel… but it’s not what you’d expect!

Frozen! Frozen! Frozen! That’s all I heard people talking about last winter. Living in New Jersey at the time, I thought they were talking about the unusually snowy weather we experienced, but on top of complaining about the bitter cold, everyone was cheering about the wildly successful animated Disney musical film, Frozen. After killing it in the box office, winning awards like a few Oscars (no big deal), and spawning endless amounts of video clips of fans singing the movie’s popular hit “Let It Go”, a sequel sounds inevitable. It has been recently announced that Frozen will, in fact, get a sequel… in book form!

The sequel will be a series of four books set to be released in January of 2015. They will be written by licensed book spin-off queen, Erica David, who has written books for such franchises as How to Train Your Dragon, Legend of Korra, and Mr. Peabody & Sherman, among others. Whether you’ve heard of Erica David or not, she certainly has done a lot of this type of work in the past, so fans of Frozen of all ages can rest easy knowing this book sequel is in good hands.

But wait a minute! What?! A musical Disney film will continue its story in books?! I’m sure it doesn’t sound like it makes sense when it’s said like that, but it’s a good route to go. We live in a world where I hear a lot of people saying that reading is a dying hobby and kids just read grammar and spelling blind text messages and avoid books at all costs. Well, if a popular film continues in book form, then maybe some of these young kids out there who don’t read will start reading. My generation had Harry Potter giving us a magic-fueled kick in the broomstick to get us into reading gear, so who is to say this new Frozen series won’t do the same for the next generarion?