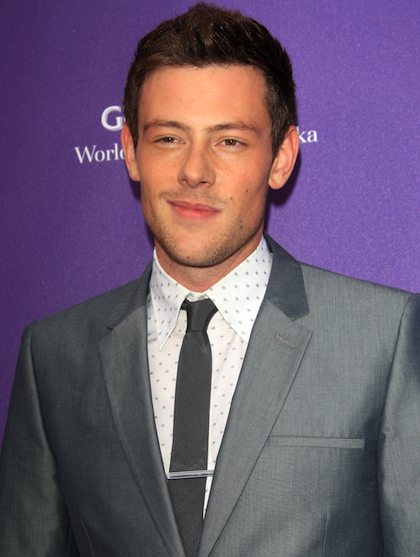 31-year-old Canadian actor Cory Monteith was most well-known for (and will forever be identified with) playing favorite underdog Finn Hudson on Fox's musical dramedy "Glee", a lovable jock who reluctantly joins his high school Glee Club after being blackmailed to by his teacher, Mr. Schuster (Matthew Morrison). He came to actually enjoy being a part of New Directions, and went on to date his counterpart, the determined diva Rachel Barry (played by Lea Michele, who later dated Moneith in real life). The rather odd pairing became more endearing as the show went on, and the pair were lovingly dubbed “Finchel” by fans.

As the seasons passed, Finn began to mature and help out his fellow gleeks. He stood up for his stepbrother, the openly gay Kurt (Chris Colfer) when he was bullied, and he later went on to help run the Glee Club after graduation. He made a heartbreaking decision in the season 3 finale, when he put his then-fiancé Rachel on a train to New York so that she could follow her dream of one day starring on Broadway rather than stay behind and marry him.

Moneith tended to play Finn with a mix of wide-eyed innocence and boyish charm. He could play comedy as well as drama; my favorite Finn line has to be “You’re the most talented person I know. Even more than that guy at the mall who can juggle chainsaws.” In addition to being a talented actor, Moneith could also belt out a show tune, dance, and rock out on the drums. I’m personally very saddened that we will not get to see Monteith go on to portray other characters. We have lost a great talent.

Monteith’s fellow co-stars, writers, and crew were deeply saddened to hear about Monteith’s passing. We at Young Hollywood are equally in mourning. Monteith was always a delight to interview. Humble, funny, and always welcoming. Cory will be missed.

We first met Cory when he invited us into his humble Hollywood bachelor pad for a BBQ:

The last time we spoke to Cory was a year ago this week at Comic-Con in San Diego, where he expressed the desire to be able to stop time... we wish we could too right now: