In Defense of Thor (the Character) 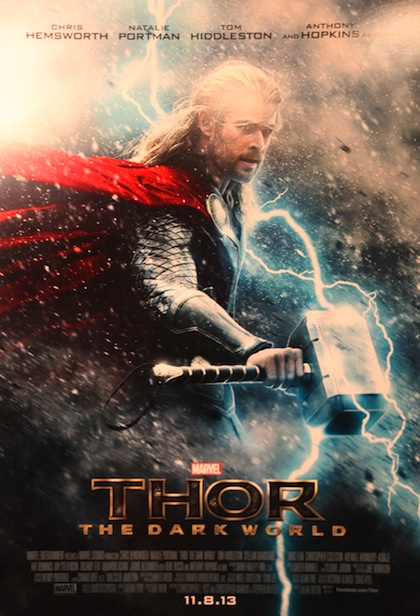 WARNING: This is an article about Thor, and as such, I am required by the laws of time and space to make at least one pun regarding a hammer or electricity. I can’t tell you when it’s going to pop up, and you certainly won’t see it coming, but I just felt that I couldn’t, in good conscience, leave you without some sort of disclaimer. Now let's move on, shall we?

These past few days saw a new box office champion crowned, as Thor: The Dark World took the number one spot with an $86 million opening weekend. This is not a bad little haul in terms of box office returns, and it certainly shows that the big blonde demi-god has more than a few fans out there. I certainly can be counted as one of them, as Thor was my favorite of the Marvel Movies prior to The Avengers, and Thor: The Dark Worldwas a flick that I enjoyed quite a bit as well. But, like everything that exists in this world, Thor also has it’s share of disapproving critics. This is certainly not an unusual thing, seeing as how every move in existence has its detractors... Except for Dunston Checks In. Nobody in their right mind would ever speak ill of that movie.

So, why step up to the plate to defend the Son of Odin? Well, because in rooting through all of the negative things written about Thor, whether they be from professional critics or just everyday moviegoers, I have found one thing that is constantly being brought up that, in my opinion, is just plain wrong. I’m not saying that either movie is perfect by any stretch of the imagination. It’s just that there is this one thing that keeps popping up that I find completely odd and not very constructive. For the sake of the subject matter and my own attempt at cleverness, let’s call this thing The Myth of Thor, and it goes like so:

"Thor is the Least Relatable/Most Uninteresting Member of The Avengers."

Let me start by saying that I like every member of The Avengers. Heck, The Avengers was my favorite film of 2012, so I hardly have too many things to complain about. That being said, the most popular and enduring myth floating out there about Thor is that he the least relatable hero currently residing in the Marvel Movie Universe. I mean, come on, we’re only talking about a 6’3” blonde haired Norse God from the realm of Asgard who can fly through the air and shoot lightning from a little hammer that he carries. I’m sure California is loaded with folks like that. Seriously, though, it’s a cheap little complaint about a character, and as such, I will offer a cheap little response: Which other member of The Avengers can you relate to more? Is it the genius scientist that turns into a powerful green monster when he gets angry? Is it the multi-billionaire who flies through the air wearing a suit of robotic armor while getting advice from the disembodied voice ofPaul Bettany? Perhaps you see a little bit of yourself in the master assassin who shoots exploding arrows, or the ex-KBG Agent who is a master of martial arts and can electrocute you with her little wrist bands. I myself feel like I can relate to the World War II soldier who got frozen in a block of ice and then thawed out years later. Yup, I certainly find the Looney Tunes logic of how Captain America can still be alive in modern times much more believable than a slice of Norse mythology.

But let us try to move beyond pettiness such as that and really take a look at the character of Thor. Beyond all of the hammer-throwing and coffee mug-smashing, Thor is a person who had to rise above his own ego in order to do what was truly right. This is something that everyone has to deal with at some point, and what Thor goes through in the first movie is merely a basic human struggle that has been magnified in an extreme way. The other 3 fantastical members of The Avengers all have problems of their own to deal with, but I think that audiences may be a little bit more comfortable admitting that they have those problems. Captain America feels like an outsider, Bruce Banner has to control his anger, and Tony Stark has to right the wrongs that he created in his past. Plenty of people can admit to having those problems, and in a way, it’s okay because those problems breed sympathy. Thor is a character who thought that he was better and smarter than everyone else. Nobody in the audience for the film was rushing to stand up and declare they also think they are better than other people. But it’s a fact of life. Everyone has an ego, but most people like to pretend that they don’t. Well, everyone except for me, that is. After all, I’m merely writing an article in which I’m trying to explain why my views on Thor are right and other people’s views are wrong. It’s as simple as that, and there is no ego to be bruised. That being said, be sure to like this article on Facebook and share it with all your friends on Twitter.

One thing that I’d like to point out is that Thor and Tony Stark actually have more in common than most people tend to realize, as they are both men of privilege who have been taken down a notch or two and forced to face reality. In both Thor and Iron Man, our heroes realize that their past actions have actually caused people to suffer, and they in turn drop their egotistical baggage in order to correct matters. And neither one of them are completely free from their own personal flaws. Tony Stark is just as arrogant in the other movies as he was in the first, and you see that Thor still has to struggle a bit with his ego as well. I actually think Thor is slightly more interesting because you can actively see him trying to keep his ego in check, but sometimes it still slips through the cracks. Stark is apparently comfortable walking around in his privileged and sarcastic skin, while Thor is actively making an effort to better himself as a person. I’m not saying that one character is better then the other, but do think that both characters are compelling and entertaining.

But in the end, as I said before, I love all of The Avengers and can’t wait to see what sort of shenanigans they get up to when it comes time for them to battle James Spader in The Avengers: The Age of Ultron. Thor is my favorite of the heroes, and despite the fact that I just wrote a huge article on him, I’m quite okay with people not agreeing with that. I just find remarks like "he is uninteresting and not relatable" completely mind-boggling. If your suspension of disbelief and willingness to accept pure fantasy has a limit, then just admit it, as there is nothing wrong with that whatsoever. Just think carefully before you attack somebody with such an electric personality...

BOOM! I warned you!