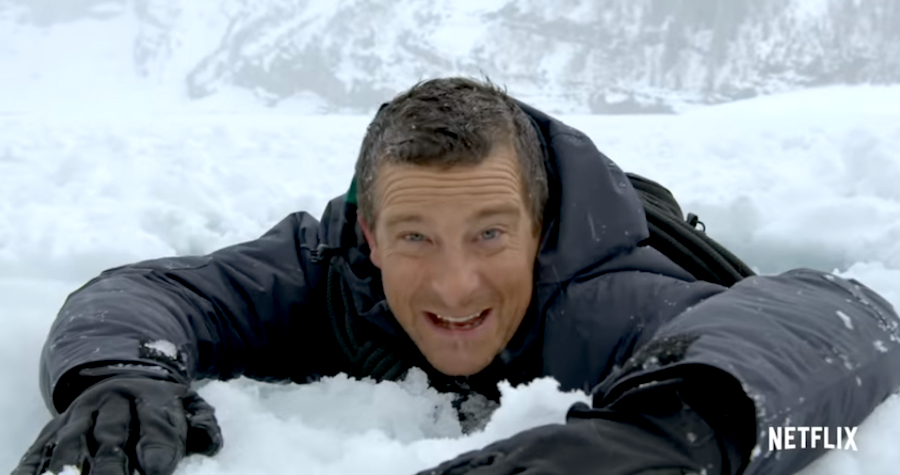 Netflix has released a trailer for “You vs. Wild” and you’ll get to “choose your own adventure” with Bear Grylls along several expeditions around the world!

The 8-episode series is a spin-off of Bear Gryll’s show “Man vs. Wild” and viewers will get to choose Gryll’s survival decisions. The show will take place in a variety of places, including the jungle, desert, and forest. Fortunately for us, we won’t be at risk and Bear will be taking all those leaps for us, but it’ll be an adventure to venture with him!

The trailer shows Bear in numerous survival scenarios, from swinging like Tarzan in the forest to fighting off a wolf, with Grylls barking “You decide!” at the viewers. He even implies that a wrong choice could have real consequences: “You’re in charge here! You’re on this journey with me! And if you don’t make the right choices, it might not end well for me!” His life lies in the decisions we make! Exciting but a little nerve racking.

Since this is an interactive show with Choice A vs. Choice B… that means Bear had to film  both choices in any scenario, including the one that didn’t “end well”. So that’s something that’s going to be interesting to see play out in the show. Hopefully, our adventure pal doesn’t get into any real danger!

The show has been directed by Ben Simms and counts Bear Grylls, Chris Grant, Drew Buckley, Ben Silverman, Howard Owens, Rob Buchta, and Delbert Shoopman among its executive producers. Production companies for the show are Electus and Bear Grylls Ventures.

“I’m so proud to deliver this first-of-its-kind live-action interactive series, really giving viewers an all access pass to explore the world and its landscapes in my boots,” Grylls said in a statement. “The stakes are high in this one!”

This is Netflix’s third interactive series. The first was back in June of 2017, and at the time squarely targeted kids, with “Puss in Book: Trapped in an Epic Tale” and “Buddy Thunderstruck: The Maybe Pile.” The company followed up with an interactive “Minecraft” show produced by Telltale Games. In December 2018, they released “Bandersnatch”, an interactive “Black Mirror” episode with sinister choices. The response to “Bandersnatch” was super positive as the internet exploded with amazing feedback and conversation.

Catch the trailer here and watch the series April 10!