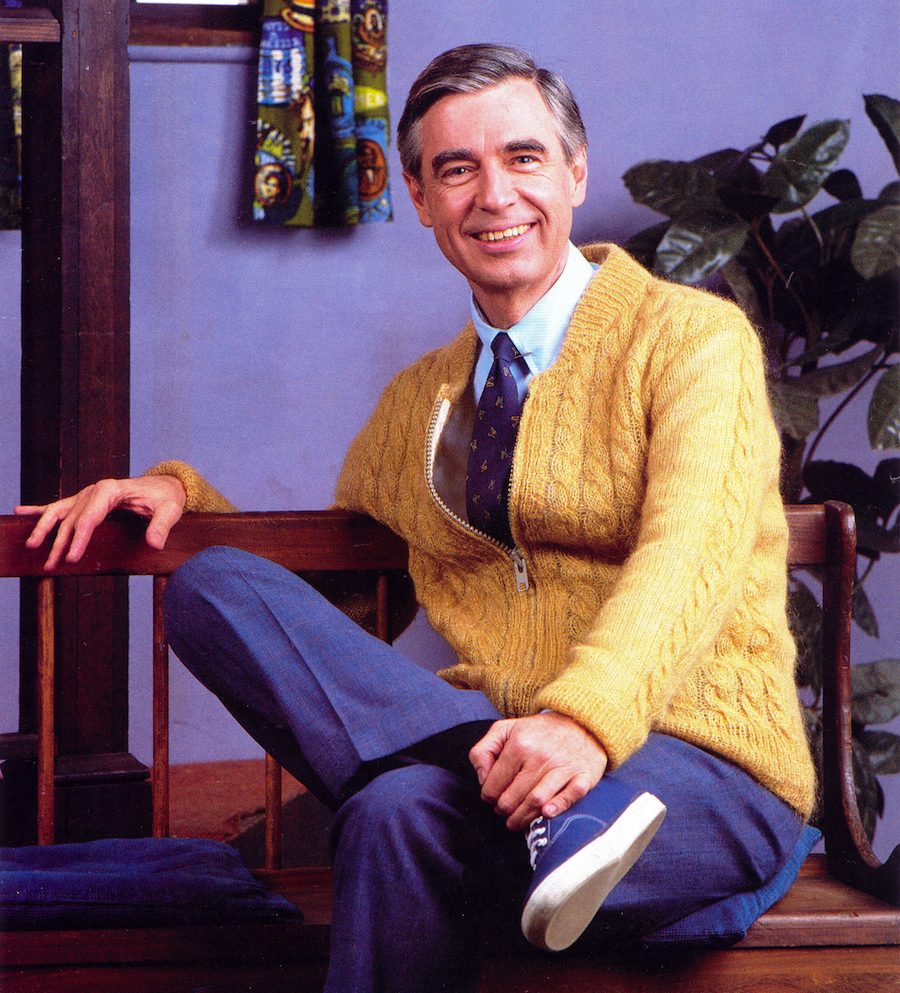 The Disaster Artist comes out this week!!! That’s all you need to know for this week so go out and see it even if it’s not playing by you. Not interested? That’s your loss but if you insist you don’t care then below might be some stuff you do care about!

Mr. Rogers Documentary In The Works

Some of you may or may not know about the host of the popular children’s show of yester year, “Mr. Rogers’ Neighborhood”, Fred Rogers. With a career in children's television and making cardigans cool spanning five decades on a show that ran from 1968 to 2001, Mr. Rogers touched a lot of people and helped educate a few generations of children… no big deal. Now, Focus Features and Oscar-winning documentary director Morgan Neville(20 Feet From Stardom) have teamed up to make a doc on the real Mr. Rogers called Won’t You Be My Neighbor? expected to be released on June 8, 2018.

According toDeadline, the documentary will “go beyond zip-up cardigans and the land of make-believe, and into the heart of a creative genius, who inspired generations of children with compassion and limitless imagination.” Sounds great and heartwarming. Like many kids, I grew up on Mr. Rogers and would love to learn more about the guy and what he was like off-screen. Something that I’m not sure if it will be addressed are the urban legends after his death that he was a sniper in the Vietnam War with over 20 confirmed kills (meaning he probably killed a lot more people) and that he wore his trademark cardigans on the show to cover up a series of scary military tattoos.

For drama purposes, it does make a great story for somebody who saw and partook in war violence, thus contrasting his on-screen persona, but ultimately exposes the beauty of a man who saw tragedy and decided instead to bring love into the world everyday until he died. However, those Vietnam myths have all been debunked. Mr. Rogers, in fact, went from college into media and completely missed being drafted into Vietnam. He was even a vegetarian. Still, it will be interesting to see if the doc will address anything to do with that fictional part of his life, as there are quite a few people who today believe those cardigans were a cover-up necessity and not a benign and iconic fashion choice.

Shaft was one of the most famous 1970s blaxploitation films and is most notable to some fans for influencingQuentin Tarantino (who claims his character Django is Shaft’s ancestor). Originally, Shaft was a smooth-talking private investigator with a penchant for violence. In the original 1971 film, John Shaft was contracted by a Harlem mobster to rescue his daughter from being kidnapped by an Italian mobster. He also has the best theme song of all time. Right on:

Back in 2000, the film series was... remade? Rebooted? It was actually a sequel with Samuel L. Jackson (a Tarantino favorite) in the starring role as Shaft’s nephew who is an NYPD detective named after his uncle. This latest reboot, entitled Son of Shaft, coming to Netflix fits more as a sequel as well, since Jackson will reprise his role as John Shaft II and teams up with -- as you may have guessed it from the title -- his estranged son John Shaft III, played by Jessie T. Usher(Independence Day II and the upcoming Creed II).

Usher’s character is described as being an FBI cyber expert. What case the two are working on together remains to be seen, but it does appear they aren’t paired up together by choice. Adding to the tension, New Line Cinema, the studio behind the film, has said that their competing styles will show us “old school meets new school”. Also recently joining the cast is Alexandra Shipp, who is best known lately for playing Storm in the X-Menprequel movies. No release date has been announced but word is it will hit theaters first in America and then Netflix; however, it seems it will only be available on Netflix internationally.

News came out that 20th Century Fox is looking to make a follow-up to their star-studded Murder on the Orient Express with anotherAgatha Christie novel entitled Death on the Nile. Just like Murder on the Orient Express, this upcoming Death on the Nile would also be a remake of sorts, as it was also a 1970s film starring a cast of Hollywood greats, like Mia Farrow, Maggie Smith, Angela Lansbury, Jane Birkin, Bette Davis, Jack Warden, George Kennedy and David Niven:

This 1974 version, while starring many famous people of the time, didn’t do so hot at the box office, but it’s still an existing property so it makes sense for Fox to give this one a shot as well. In case you couldn’t tell from the trailer, or are not familiar with Christie’s work because you were snoozing in your middle school English class, pretty much all of her works are murder mysteries and detective novels. The character of Hercule Poirot in Murder on the Orient Express is Christie’s most constantly used character as he is a detective who tries to solve said murder mysteries. He’s the main through-line in how Fox intends to make this sequel. Not sure what there plans are long term with this, but it would be delightfully insane if they made their own Agatha Christie cinematic universe because who would’ve ever thought to ask for something like that?

No release date or cast has been announced at this time for Death on the Nile but it is expected that Murder on the Orient Express director Kenneth Branagh will be returning to the director’s chair and as the starring role of Hercule Poirot.

For all the various original content that Amazon has amassed this decad,e the only scripted kind of show they’ve seemed to be missing is a multi-cam sitcom. While the staple is single-cam, it still stands that many of the most popular shows around the world are multi-cam sitcoms, so now Amazon feels the time is right for them to jump on it with a new pilot starring Georgia King of “Vice Principals”, created by the “How I Met Your Mother” guysCarter Bays and Craig Thomas, and continuing their adventure into television world will Seth Rogen and Evan Goldberg (I’m sure you know those guys) as producers.

The pilot’s name is “Making Friends” and centers on an artificial intelligence scientist who creates robots and makes them his main group of friends (kinda like "Mystery Science Theater 3000"). The conflict comes in when the scientist invites a bartender (King) over and then the robots apparently lose their sh!t and go rogue on their friend/creator. This is one I’d definitely have to see before forming any opinion but it could be fun to see robots go through a cross-species bigotry, jealousy-fueled existential crisis over the fact their best friend/father can make friends with somebody that’s not like them.

The pilot has no release date set and will only be a pilot for the time being. In case you didn’t know, but Amazon usually has their subscribers vote on what pilots to keep and continue as a regular show… with the new untitled Lord of the Rings prequel series being the exception.

What’s another week without new trailers for movies and tv shows? Well that’s no week at all!

Avengers: Infinity War – Yup, it’s here and boy are there a lot of people in it. Might take 22 movies to cover it instead of two:

Peter Rabbit – Is this about General Hux entering witness protection?

All the Money in the World – You hear about that movie that said maybe a month ago they were going to reshoot all of the already-filmedKevin Spacey scenes with Christopher Plummer? Well… that was quick:

Love, Simon – Fault in Our Stars guy… Something tells me my girlfriend is gonna make me watch this.

El Camino Christmas – They already played Rudolph the Red Nose Reindeer and I missed it but this NSFW Christmas movie trailer almost makes up for it:

The Disaster Artist – Sure it’s not new but go see it!