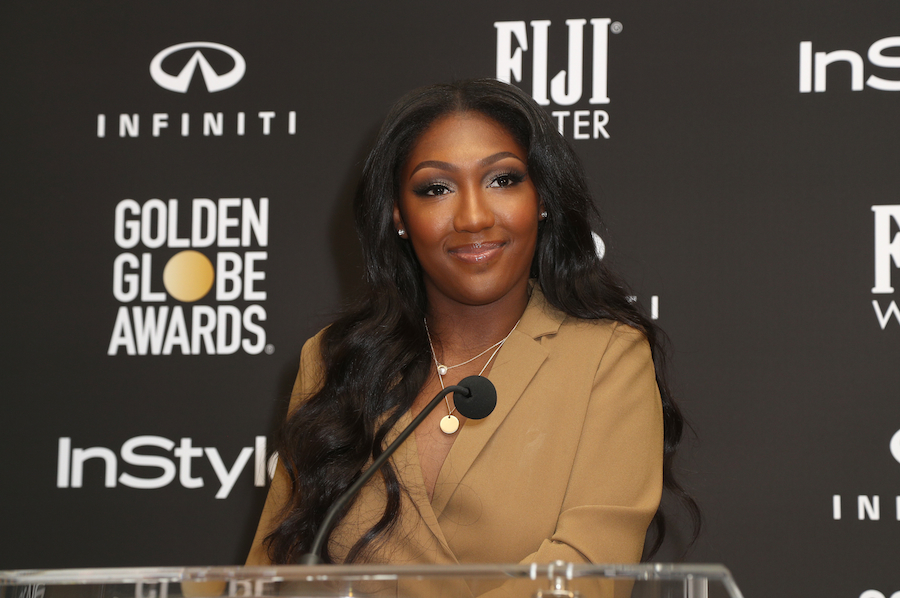 Looks like the Elba family has another reason to celebrate -- Next year, Idris Elba’s daughter, Isan, will be the 2019 Golden Globe Ambassador!
For those of you that may not know, the Golden Globe Ambassador is the person who assists in handing out the Golden Globes when they are presented at the award show, and then escorting the winner off stage. It is selected by the Hollywood Foreign Press Association (HFPA) and is usually the son or daughter of famous Hollywood stars. The position was previously called “Miss Golden Globe” or “Mr Golden Globe”, depending on who was selected, but the name was officially changed to “Golden Globe Ambassador” this past year to make it gender-neutral and more inclusive.
Several others in this position have gone on to become incredible actors and/or Golden Globe winners themselves, including Melanie Griffith(1975), Laura Dern (1982), and Dakota Johnson (2006).
To share the news, Isan took to Instagram to express how excited she was, captioning the picture “I am so elated to announce that I am this year’s Golden Globe Ambassador! I am so honored that the HFPA has chosen me and I look forward to representing the Globes while also shining a light on mental health among African-Americans and teenagers.” Good on you, Isan!

I am so elated to announce that I am this year’s Golden Globe Ambassador! I am so honored that the HFPA has chosen me and I look forward to representing the Globes while also shining a light on mental health among African-Americans and teenagers! @goldenglobes #goldenglobeambassador #goldenglobes

Her proud dad, who himself was JUST named People's Sexiest Man Alive a few weeks ago, was also excited to share the news, posting the same picture to his Instagram with a sweet caption for his girl.

Proud of you @isanelba for being the 2019 ambassador for the @goldenglobes ..it’s amazing to see you shine in your own light. I love you much. â¤ï¸Dad Dad.

Isan's mother is Kim Nørgaard, to whom Idris was married from 1999 to 2003. Isan and her mother currently live together in Atlanta, Georgia.
We can’t wait to see Isan shine as the Golden Globes Ambassador! The 76th annual Golden Globe Awards will air Sunday, January 6, 2019 on NBC.
(Image via Frederick M. Brown/Getty Images)
- Brooke Sharland, YH Contributing Writer