How I Learned to Stop Worrying and Love The 'Fast and the Furious' Franchise! 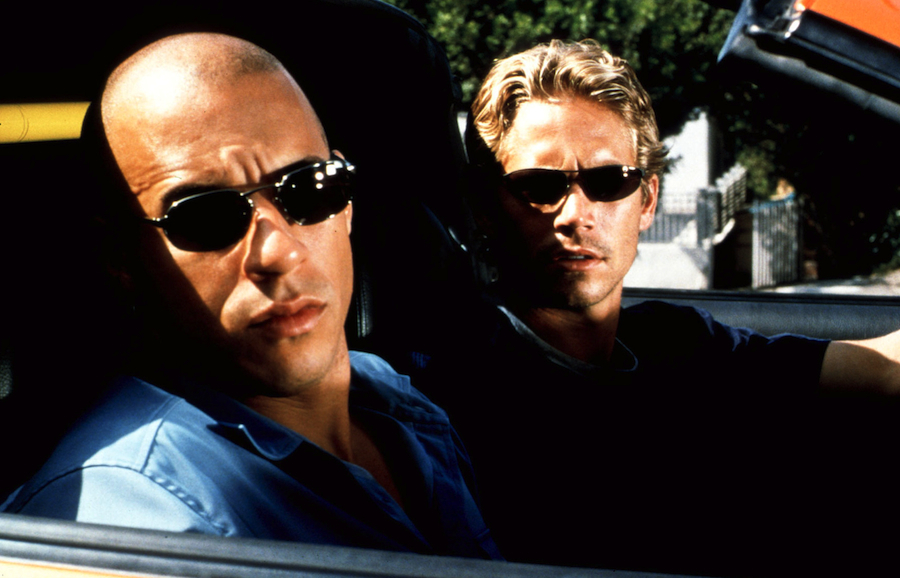 Growing up in the suburbs of New Jersey next to a farm, you learn to like a lot of things that maybe aren’t that great but they provide a grand level of escape. For me, a movie that I would watch when I was a very young lad -- because it made my eventual home of Los Angeles seem like a fantasyland with plenty of fast cars, scantly-clad women, and, of course, family -- was The Fast and the Furious. After a lackluster sequel that I would hate-watch in 2 Fast 2 Furious, followed by growing up and seeing from the outside that the rest of the movies just seemed goofy, I fell out of grace from the Furious Family… until a couple of weeks ago.

A friend of mine who was raised in the same town as Jesus Camp but in a slightly less strict religious community would not stop raving about the latest installment, Fate of the Furious. Something about the shots of girl’s butts and the over-the-top action sequences really clicked with my formally-religious, Mid-Western friend. I told him, “I can’t watch these. They look like a total parody of action movies from another any number of universes that movie or TV characters watch, not actual people like you and I who watch movies and TV shows.” To prove my point up top is the hidden movie scattered through out various episodes of “The Simpsons" about their Arnold Schwarzenegger-esque action movie character analog, McBain:

Funny stuff and absolutely ridiculous, but one of the things that kept me completely away from this Fast franchise. Then my friend showed me this trailer for Fate of the Furious:

The Rock threw a frickin’ torpedo!!! It’s raining cars!! There’s a submarine chase!!! What is happening and why do I need to see this?? There’s plenty of other perfectly ridiculous moments in this trailer, like “Are you gonna turn your back on family?” Followed by no words and just a Vin Diesel cold shoulder as he turns his back and walks away. I immediately got to work and, at the recommendation of my friend, I watched the “reboot trilogy” of Fast Five, Furious 6, and Furious 7. Here’s  breakdown of that process:

More often then not, I had no idea what was happening at any given moment in this. The plot and the motives are pretty scattered, but it’s basically about the Furious Family trying to pull a heist on the worst person in Brazil, who also happens to be the richest. I remember these movies being about street racing and stealing DVD players. Street racing is all but gone, however the stealing stuff is still alive, which, in my opinion, is actually an upgrade. It reintroduced the cast to me from past movies, as well as some new friends, like The Rock as the perpetually sweaty government employee who wants to take down the Furious Family, Hobbs, and some other characters from the 3rd and 4th which I have yet to see (I’ve been told not to). It also plants the idea that the Furious Family possesses superhero abilities of being invincible so long as they’re touching cars (trust me, just pay attention to what is happening whenever they touch a car). It’s the first in the trilogy, but maybe my favorite, as it taught me that this franchise truly is the one that characters in TV shows and movies go to see, and that’s their appeal. Plus, the final action scene might be the best bit of car chasing I’ve ever seen. When you think this movie can’t get anymore ridiculous, they up it to 1,000 quickly! Just good, new-fashioned, over-the-top, post-modern action flick fun.

It’s tough to say where I would rank this one. It’s got action like the others, but the action itself is lacking. Surprisingly, I had more of a thrill ride with what happens to certain characters than I did with the action in this movie (the invincible-when-touching-a-car theory really holds up). Still, it’s a lot more of the same bonkers and outrageous action that I expected after seeing Fast Five and is by no means not fun to watch; it just couldn’t live up to the high-octane levels of Five. Hobbs is back in full sweat mode as he needs to recruit the Furious Family to help him take out a villain named Shaw who wants to get a microchip to blow up the world... or something? I’m hazy on the plot, but it’s easier to follow than Fast Five. All I know is, he’s an actual terrorist and the first villain they fight who’s actually a real threat to the world. As Hobbs puts it, “The last place I want to be is in front of your doorstep selling girl scout cookies.” What is he talking about? Propositioning a high-level government job to known criminals to take out a terrorist. Either way, this movie is a lot of fun and totally worth the watch. It’s just as brilliantly goofy as Fast Five in story and dialogue.

The previous two films were directed by Justin Lin, whom I thought did a great job, but for Furious 7 they wanted to give James Wan (best known for directing the horror movie Saw) a shot, and you can tell a huge difference by how the movie flows and the shots they chose. I wouldn’t say it’s for the better necessarily, but it’s different in its own way and I would say both Lin and Wan have a good grasp of action. Now, Furious 7 picks up where Furious 6 left off and ups the action. The beginning is kind of slow and starts with a street race, but from then on out, you have little room to breathe as the action keeps going, and going, and going. It’s like the opposite of Furious 6. The main villain of this is Shaw’s older brother, played by action star Jason Staham, and whereas the last movie was the first threat to the world, this Shaw is that as well as also having invincible superpowers. For the first time, the Furious Family seems to have met their match, and holy motors is it fun! At times, though, I was wishing that we could have some more moments in between the action to just chill out, which makes Fast Five my favorite but damn if this one isn’t great, and, of course, Hobbs is still sweating and it makes no sense why. These moves truly are an escape to a fantasyland after all.

Before we move on, though, I should mention the elephant in the room, which is that this is the movie where Paul Walker died during filming. At times, it’s noticeable that they’re using his brother as a stand-in and combing CGI to make Paul Walker’s face. I have to say that I saw Rogue One before Furious 7, where they pasted on two characters' faces with CGI, and one of them is in a supporting role throughout the film. I know some people didn’t think it looked great, but I thought it did and, overall, I loved Rogue One. With that said, I have to give it up to Furious 7 for actually doing this better. I don’t know if it's because they used Walker’s brother and the facial similarities are much closer than actors used in Rogue One, or if they simply had better technology than Disney (which I doubt), but they really pulled it off well. On top of that, there was quite a touching tribute to Walker at the end of the movie. I’ve heard from other people that they cried.

Where would we be if I didn’t get into this one? I saw it opening day, no big deal. I will start by saying that this isn’t my favorite, but it did something the other recent installments seemed to not really do: have a great street race and use plenty of NOS. The street racing roots come back for a bit and then it all of a sudden becomes the most 007-esque entry the franchise has ever had, complete with a blackmailing supervillain who uses an airplane as her secret hideout/base or operations. What does this mean for later installments? I have no idea, but I can tell you #F8 upholds the tradition of otherworldly fun we’ve come to expect from this franchise, complete with incredibly stupid fun moments in both dialogue and action. Once again, I’m not sure of the main villain’s motivation or exactly what is happening at times, as well as the fact that none of the plot twists really add up at the end, but it’s still some of the most fun you can have at the movies right now!

Fate of the Furious is out now!! Get your tickets because I already have!!