How 'Guardians of the Galaxy' Could Change the Superhero Movie Game 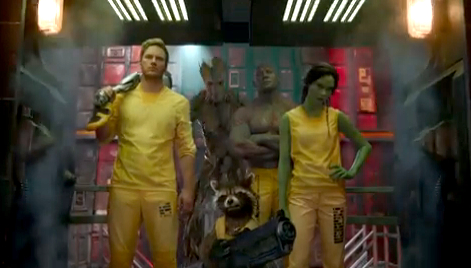 I think when the first trailer for Guardians of the Galaxy debuted way back in the dark ages (it was actually only a couple of months ago, but anything older than that is considered pretty dated by most people these days), we had a sense that this latest offering from Marvel Studios might be a little different than anything else they had released. This second trailer, which debuted yesterday, pretty much confirms just that. Not only does this look like a wonderful space epic that could easily stand alongside classics like Star Wars, Star Trek 2: The Wrath of Khan, and The Last Starfighter, but it also further signifies that Marvel is ready to up their game.

Several times now, I have written about the Marvel Movie Universe, and I have to say that writing about it doesn’t really get old, so you better bloody well get used to it. We’re going to be seeing these kinds of movies for quite a while to come, and to not pay them any mind is pretty stupid (and unavoidable). Now, as much as I enjoy these films, I will be the first to say that not all of them are perfect. At their best, they’re wonderful representations of what the action, adventure, and fantasy genres have to offer, and that is high quality entertainment with a decent amount of thoughtfulness and humanity sprinkled throughout. At their worst, they are roller-coaster rides that you almost immediately forget about after you finish riding them. Guardians of the Galaxy seems like it is poised to break the mold and not only be seen as a good Marvel movie, but just as a good movie period.

The first noticeably different thing about this story is that it takes place in outer space and on alien worlds. I know that Thor and Thor 2 were set on other worlds too, but Earth always played a part if for no other reason than to provide context for just how extraordinary these other worlds and their people are. Doesn’t look like there is going to be much of Planet Earth in this film, though. If anything, it might show up in flashbacks relating to Peter Quill’s past, but for the most part, it looks like the majority of the film will take place in unfamiliar parts of the Galaxy. This is a wonderful opportunity for the filmmakers to do some real world-building. If they can elaborate on these alien cultures and really put some detail and effort into their creation, than they can potentially create an absolutely absorbing film on the level of Avatar ...only better. Why do you think everyone is so obsessed with "Game of Thrones"? Yes, I know it’s because Peter Dinklage is awesome, but think beyond that. The show is a massive hit because it is truly a fine example of escapism into a fully-realized world that is so rich and detailed that it sucks people right in.

When you are crafting an action/adventure story, you are immediately creating a hyper-stylized world. But unless you really put some detail into the culture of the location, then people are not going to fall asleep while imagining themselves having an amazing adventure in Tucson! Concurrently, the reason I moved to New York is because there are countless movies out there that made that city come alive for me. The other Marvel movies, up to and including Captain America 2: The Winter Soldier, are all well and good, but the familiar settings and environments are afterthoughts and will always keep those stories slightly more anchored than they should be, because, in the end, while the stories and characters are interesting, the worlds of those movies are fairly standard.

But enough of that boring stuff! Let's get to that band of misfits known as the Guardians of the Galaxy. I, for one, am quite pleased at the casting of Chris Pratt as Peter Quill, as we will finally get a leading character who can handle the action while still be charming and hilarious at the same time. Well... actually, we have a ton of characters like that in the world of film, but Chris Pratt is a genius when it comes to comedy, and I can’t wait to see him take the reigns of this movie. The coming together of a bunch of different individuals for the sake of the Greater Good is not exactly a new thing. So, if you were about to say that Guardians of the Galaxy reminds you of “Firefly”, then please count to 7 and then say something that is not that. “Firefly” was not the first damn story about misfits helping people, and it sure as hell won’t be the last. It’s a tested formula that works incredibly well when real thought is put into the characters. Also, unlike The Avengers or any of the other Marvel movies, this film has the advantage of the general public never having even heard of one of these characters, so when the movie is released, the journey to get to know them will make the movie all the more memorable because friends and loved ones can truly share the experience of discovery together. Now, add in a large tub of popcorn that is 50% butter, and the aforementioned image is actually quite beautiful to imagine.

Oh, and the movie looks damn fun. In this day and age when we have Godzilla trailers that make you weepy and depressed, Superman movies filled with countless deaths, and Star Trek movies that feature angry Peter Wellers, it’s nice to see a film emerge that obviously takes what it is doing seriously but knows how to have fun and be adventurous at the same time. But don’t take my word for it. Peep the trailer to see what I mean, and I will see you at the multiplex come August.

In the meantime, check out our chat with stars Pratt, Lee Pace, and Karen Gillan from last year's Comic-Con!