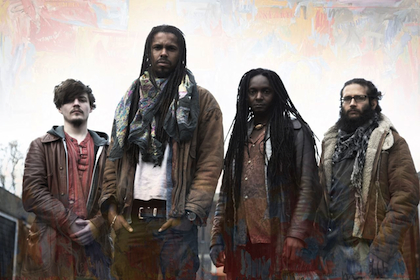 Mangoseed is a London-based funk/rock/reggae group with vocals that blend the line between rapping and singing in a unique way, all the while translating big messages about the world through song.

Members of the eclectic band include Nicholai La Barrie on lead vocals, Karlos Coleman on lead guitars and backing vocals, Richard Hardy on bass guitar and backing vocals, and Sam Campbell on drums and percussion. The group has a world fusion aspect, which comes from their unique style choices and also from the fact that the members have mixed descent spanning from Trinidadian and Jamaican to Australian and Irish. The band had a natural development, starting with low key jam sessions and eventually transitioning into live performances together.

Their musical voice is politically and spiritually charged, which they make accessible with their penchant for performing high-energy gigs. The group lends their skills to charity functions whenever possible and they are just releasing their first album entitled Basquiat.

On the album, the band has said it "...is inspired by the work and spirit of Jean-Michel Basquiat. His use of old and new, his focus on suggestive dichotomies and rebellious ability to use any influence in his work. In Mangoseed terms, that means that we have pulled form all the genres that we love, all the artists and bands that have inspired us and lead us to create music and made unique homage to them, so Red Hot Chili Peppers, Wu-Tang clan, the Watts poets, and Bjork meet in the same track, and hopefully it becomes an homage to all of them but also taking the inspiration form those artists and many more to create our own idea our own flavor."

The music video for the first single off of the album, “Brix-tone”, highlights the multicultural melting pot of Brixton and some of the dramas that have gone along with it. The band’s funky vibe keeps the content interesting no matter which way it goes, their full-bodied instrumental approach keeps your ears locked in, and their deep messages keep you thinking about it when it’s over.