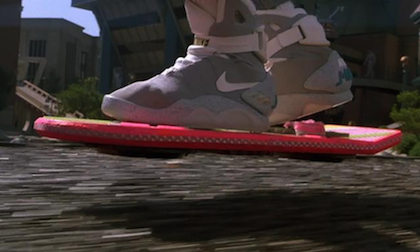 Recently, a company put up an ad on Kickstarter. That's nothing new, really... except that this company is called Hendo and they’ve got the technology to create the world’s first working hoverboard! Finally, our dreams from watching Back to the Future 2 will be fulfilled! And the best part about it is that they’ve already reached their money-making goal before their deadline of Sunday, December 14, 2014, so it’s pretty much locked in that, some time next year, we will have those hoverboards that BttF2 promised us!

To give you some background on Hendo, founder and physicist Greg Henderson discovered the holy grail of extreme sports/sci-fi movie inventions kind of by accident. When Henderson created the working hover technology, he didn’t set out to create the hoverboard; he actually wanted to create a means to levitate buildings and houses safely from one location to another. This means that a physicist with an interest in architecture somehow created an invention that people gave been waiting for for almost 25 years.

Henderson states that he got the idea of hovering buildings from trains that levitate through the use of magnets. He figured, "If you can levitate a train that weighs 50,000 kilograms, why not a house?" Houses, buildings… they’re pretty ambitious, especially when you don’t have the budget to work and test on such a large scale. Seeing that you’ve got to start somewhere, Henderson settled on levitating people to see if it would work... and it does! The only limitations Hendo’s hoverboards have right now is that you can’t ride on a surface that isn’t made of copper or aluminum, but hey, it’s a start!

Like with most Kickstarters, Hendo is giving out prizes depending on how much money you pledge. You can get things like the usual company T-shirts and stickers, but if you give enough money, you can get a chance to schedule time to test drive hoverboard yourself! Unfortunately, the ten spots for a $10,000 donation to own a hoverboard on opening day October 21, 2015 (the day Marty McFly goes into the future in Back to the Future 2) are already filled, but there’s still plenty of other great prizes to check out, like even owning some hover technology. Check them out before they're gone!

Until October 21, 2015, wet your whistles with Hendo’s very own promo for their hoverboard!