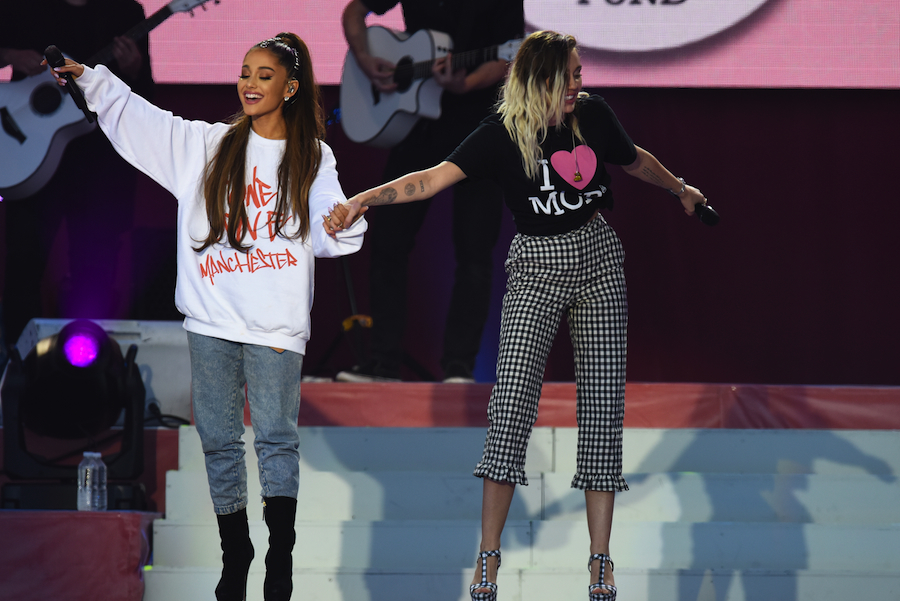 The One Love Manchester Concert was held this weekend to pay tribute and raise money for the victims of the Manchester Arena attack on May 22 during an Ariana Grande concert. Following the tragedy, Ariana vowed to return to the city for a benefit concert, and she kept her word. Ariana headlined the concert herself, alongside some spectacular stars such as Justin Bieber, Miley Cyrus, Katy Perry, Coldplay, Niall Horan, and many more. The smiles in the crowd that night were indescribable; everyone was having the time of their lives showing love instead of fear. The city of Manchester really proved that they can come together and that love will always win.

When Ariana first took the stage, she opened up with “Be Alright”, off her newest album Dangerous Woman. She had nothing but a smile on her face, and looked stronger than ever. While occasionally holding back tears, she kept singing and did what she loves to do and belted those notes for the crowd and the whole world to hear.

Grande joined the other singers on stage several times, starting with The Black Eyed Peas as they sang “Where is the Love”. The crowd was loving it and sang along while dancing and showing their love for one another. The Black Eyed Peas went on to say, “we are together and we are one, put one finger in the air.” Everyone in the whole stadium complied, representing their togetherness. At the end of the set, everyone help up hearts with their hands, and it was a beautiful sight to see.

Later on in the evening, Grande was joined by Miley Cyrus singing “Don’t Dream it’s Over”. This song is very powerful, and it was amazing to see their friendship on stage. Miley was really there for Ariana and showed her support not just for her but for everyone in attendance through the whole concert.

Before Ariana went on to sing another song, she told a quick story about meeting one of the victims' moms. She told the audience that, whenever she went to meet Olivia Campbell’s mom, she would immediately started crying, but Olivia’s mother said, “Stop crying, Olivia wouldn’t have wanted you to cry.” Her mother also went on and told Ariana that Olivia would have wanted to hear the hits, so Ariana honored Olivia's wish did just that, singing “Side to Side”.

One of the most emotional moments of the evening was when the Parrs Wood High School choir took the stage to sing Ariana’s song, “My Everything”. The talented soloist of the choir, Natasha Seth, broke down into tears when she was joined by Ariana herself to sing with them. Ariana comforted her and hugged her throughout the show, and there wasn't a dry eye in the arena for this touching moment.

The concert closed out with Ariana performing “One Last Time”, joined by all of the performers in attendance that night to support her. This song was actually an encore the night of the attack, and now it holds a new meaning. Ariana released the song on iTunes as a charity single, with the money going toward the We Love Manchester Emergency Fund in coordination with the British Red Cross.

Ariana then went on to sing a lovely rendition of “Somewhere Over the Rainbow” where she burst into tears midway through the song, and frankly so did we. The concert came to a close, and everyone was left speechless at the amount of love and peacefulness that was radiating from that stadium. The love that the people of Manchester hold in their hearts will never be taken away. It was a beautiful sight to see everyone come together and be strong thanks to the benefit concert that was held in loving memory of all the victims of the Manchester Arena Attack.