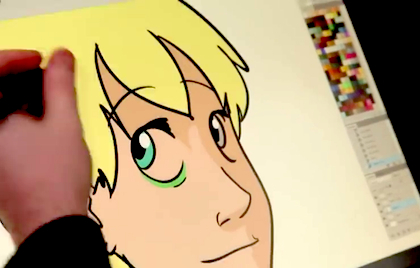 Have you ever spent an inordinate amount of time scrolling through Netflix, looking for that bit of entertainment to get you through the next couple of hours, only to throw your hands up in utter disgust and defeat? Despite the thousands of titles available at your fingertips, the plain and simple fact of the matter is that there is nothing on TV to watch, EVER. Or so it feels like. It’s an odd point of view to be sure, but one that has existed regardless since television was invented, and one that can be smited with a helpful suggestion or two from a friend or a random internet scribbler. Well, if you’re gripped with this indecisive mania, then allow me to provide you with a temporary cure in the form of this delightful documentary called Stripped.

Stripped is a very enjoyable documentary that takes you on a journey from the birth of the comic strip industry, through it’s Golden Age, and up to its current status, which is somewhat in a state of flux thanks to the closing of hundreds of newspapers and the advent of web comics. The documentary contains interviews with some of the most famous comic strip artists of all time, as well as a handful of newer artists that have been making their mark on the World Wide Web. You even get to hear from Bill Watterson, the artist behind the world-famous comic “Calvin and Hobbs” and a man who, up until this documentary, has never allowed his voice to be recorded.

Watching this documentary brought back a lot of memories for me, as I was an avid comic strip reader and actually credit that for developing my later love of reading books. As I said, they interview all sorts of comic artists, and each of them have their favorites, which in turn made me think about the strips that I used to avidly read. “Garfield” was probably the comic that I read the most, and my little toy chest was filled with those “Garfield” compilation books that they used to sell. He was a fat, lazy cat who slightly mimicked the lazy attitude that I had when I was a child, but there was something about the way that he expressed himself which drew my interest and helped to spark a little creative streak within myself. “The Far Side” was a close second in terms of favorite comics, and if I have one complaint about this documentary, it’s that not enough love is given to Gary Larson’s demented genius.

Hearing these artists talk about their craft with such passion, and looking back on their predecessors with immense admiration, made me feel like a little kid again; sliding out of bed Sunday morning for a big breakfast and then immediately sliding onto the couch to enjoy reading the latest round of comic shenanigans, which were always guaranteed to be in color on that special day. And, of course, it’s always a joy to see artists talking about their craft and the people involved with it with such love and reverence, as it helps to reaffirm your own feelings on the subject.

Unfortunately, not all is bright and cheerful in this documentary, as the issue of newspapers closing down brings a real threat to these artists’ livelihoods. If the newspapers disappear, then so does the platform upon which they present their art to the world. Some folks think that the internet, which is why the papers are closing down in the first place, is the future for this art form, although some would argue that it is not. These folks are not criticizing the talents of the folks who produce their work for the online community, but they are wary of the new business model that comes with such a change. Stripped allows for both sides of the argument to be presented and does not lean in favor towards any one faction, which allows for the viewer to make up their own mind.

Stripped speaks of an art that creates little microcosms that are filled with laughter, absurdity, and sometimes even a little bit of profundity. The film has presented comic strips in something of a new light for me and has certainly reinvigorated the appreciation that I once had for them. So, if you’re looking for a way to spend 90 minutes in front of the television, and it doesn’t involve reruns of "Battlestar Galactica", then look no further than this heartwarming little documentary about artists and their silly drawings that millions have come to love.