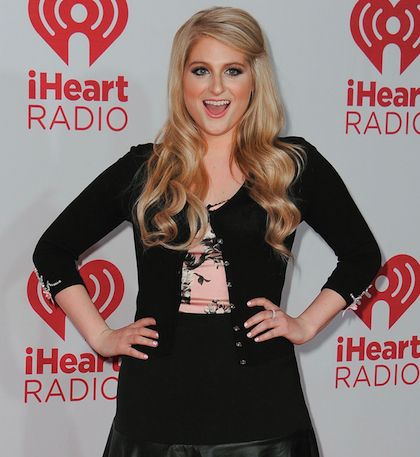 Is the song eluding you? Just in case, here’s a reminder.
Stuck in your head? Me too.

This talented 20-year-old was born in Nantucket, Massachusetts, where her whole family was very musical. She started writing and composing her own music at a very young age, and when she turned 19, she moved to Nashville and helped write songs for acts like Rascal Flatts and R5. She has two previous studio albums under her belt, but it wasn’t until “All About That Bass” came out that her career as a singer skyrocketed!

You can hear a bit of that Nashville influence beneath the '50s sock-hop inspiration in this song. It totally reminds me of those old school high school prom songs... if that year's prom theme was "booty".

Trainor just released her new single a few days ago, called “Lips Are Moving”. Have a listen!

This singer/songwriter has invaded the music charts and her future is looking bright! I wouldn’t be surprised if we see a lot more of Miss Trainor in the future!