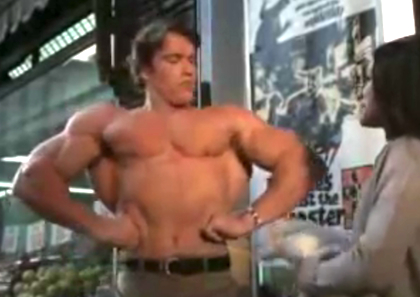 In 1969, one of the world’s most successful and highest-grossing actors was little more than a 22-year-old bodybuilding Austrian immigrant. I am, of course, speaking about Arnold Schwarzenegger, and the movie I am referring to is a gem currently streaming on Netflix right now called Hercules in New York.

Arnold (his last name is too exhausting to write) got involved with this movie through his agent claiming to a few producers that Arnold had stage experience. The agent led the producers to believe it was theatrical stage when it was really a bodybuilding competition stage. Oopsie? When it came time to put the movie out, Arnold was billed as “Arnold Strong – Mr. Universe” because the producers thought his name was too long and odd for people, especially those who have to spell it. (Oh, '60s.) This is a movie that is truly hidden on streaming.

The question is how do you describe such a movie as Hercules in New York? I turned to the Amazon review section for some help, and here is a brief one that I found: “Folks, this is a real gem! They don't make these kinds of movies any more, and it's a damn shame too.” What kind of movie is it, as in genre? That’s also a good question. Maybe by the time I’m done telling you about it, I’ll come to a conclusion. Hercules in New York starts off with Arnold as Hercules arguing with his father Zeus on Mount Olympus (which is actually in a backyard somewhere in New Jersey with lots of cars passing by and honking) about being bored and wanting to go to Earth. It’s established that Hercules is kind of a brat. After getting sent to Earth as punishment by Zeus (which is exactly what he wanted?!?), Hercules begins an adventure of just random events. He starts off by scaring people on airplanes, then fighting sailors and meeting a man named Pretzie who sells pretzels to sailors at the docks, played by actor Arnold Stang (not to be confused with Arnold Strong).

Pretzie is the heart of this movie, and when things start spiraling out of control, you have to wonder, is this movie all in Pretzie’s mind? Is it a harrowing tale of mental illness? Because it is clear that Pretzie is walking gingerly on psychological thin ice as he gets mixed up with station wagon-driving gangsters and hitting the bottle hard. Either way, this movie makes for a lot of laughs as Hercules arrives in New York and starts things off by beating up a cab driver who drove him from a dock to Central Park. Hercules didn’t have any money, and all the cab driver did was give him a ride and do his job, so naturally Hercules has to beat him up to get away. When watching this movie, Hercules is not a sympathetic character -- he’s just a spoiled rich kid who grows up to be a thoughtless jerk. For the kids out there, you’ll see what a world before CGI was really like, as most of the special effects are conveyed to you through Pretzie’s numerous over-the-top facial expressions.

For the 21-and-over crowd, this movie is easy to make into a drinking game. I’ve come up with a few myself:

1. Drink whenever Hercules mentions his own name. (Stick to only “I am Hercules” if you don’t want to puke.)

2. Drink whenever you can’t understand what Hercules is saying. (Arnold’s line reading is phonetic.)

3. Guess that line! This one requires some extra work on the part of the viewer. A variation of #2. There are two versions of this movie -- the one on Netflix has Arnold’s line reading, but the original one has him dubbed over by a British guy who sounds like he could’ve gone on to voice He-Man, because Arnold is that hard to understand. If you can get both copies and play them together, you can guess the line, and if you get it wrong, drink. That, or rewind and put on subtitles.

All in all, almost everybody has probably started their Hollywood career under less than favorable circumstances. But don’t get it twisted -- Hercules in New York is a movie that is so perfectly bad, it’s good, although there is a legitimately funny scene involving an overachieving hot dog vendor, back when New York City hot dog vendors dressed well, took their jobs seriously, and weren’t semi-homeless. If you liked Tommy Wiseau’s performance in The Room, then you will love Hercules in New York. You will see how Arnold invented the Wiseau School of Acting, but will Wiseau be the highest grossing actor in ten years? Let’s not hold our breath. But when asked about Arnold’s performance in Hercules in New York, director Arthur Allan Seidelman said he never thought Arnold would work again.

With all of that, I leave you saying, there is just so much more to talk about in this movie. It really is a treat to watch with a group of people for a pizza party and get ready for non-stop laughs, accompanied by lots of head-scratching. I will leave you with a little video that has catalogued the top ten goofiest moments in Hercules in New York, and I leave you with this saying that this video barely even scratches the surface. Enjoy: