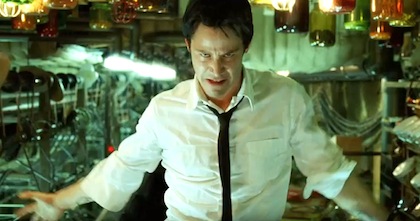 A few lucky comic book fans at Comic-Con got a sneak peek of NBC’s new show “Constantine”, and ever since then, fans have been excited and patiently waiting for the premiere of the October 24 premiere of the live action comic book show, produced by David S. Goyer (The Blade and Dark Knight trilogies). If you’re one of the many fans that has been left wanting more, the 2005 film adaptation of Constantine is streaming right now through October 15 on HBO GO!

Constantine stars Keanu Reeves as the working-class magician/exorcist named John Constantine, who, despite being British and even an icon across the Pond, is played by an American, but trust me -- he does a great job in the role. Constantine’s story takes place in a world where God and Lucifer are waging a war over the souls of humanity. Angels and Demons are prohibited from manifesting on Earth, but they can possess the bodies and consciousnesses of living humans. They can also incite the help of half-breeds (part-human and part-Angel/Demon) to spread their influence on Earth. There really is no way to regulate exactly what the Angels and Demons are doing… step in John Constantine.

Born with the power of to see the Angels and Demons, Constantine has taken it upon himself to police what is going on, but he wasn’t always so adamant about it. At age 15, Constantine committed suicide to escape his visions of Heaven and Hell battling on Earth. He spent two minutes in Hell before he was revived, but as a result of this experience, his soul is now bound to Hell, so any good he does on Earth won’t matter, because when he dies, he will be sent straight back to Hell. Constantine is also assisted by his driver/intern Chas Kramer, played by the now-controversial Shia LaBeouf. Check out the trailer below:

There you have it. It’s a solid flick. There isn’t a sequel, and personally, I wish there was, but at the same time, it stands on its own just fine. Constantine doesn’t waste a whole lot of time showing you an origin story but instead reveals things as it goes on, which is something I hope more comic book films will do on their maiden voyages from here on out. Remember to catch Constantine before October 15 on HBO GO!