HIDDEN ON STREAMING: 'Beware the Slenderman' 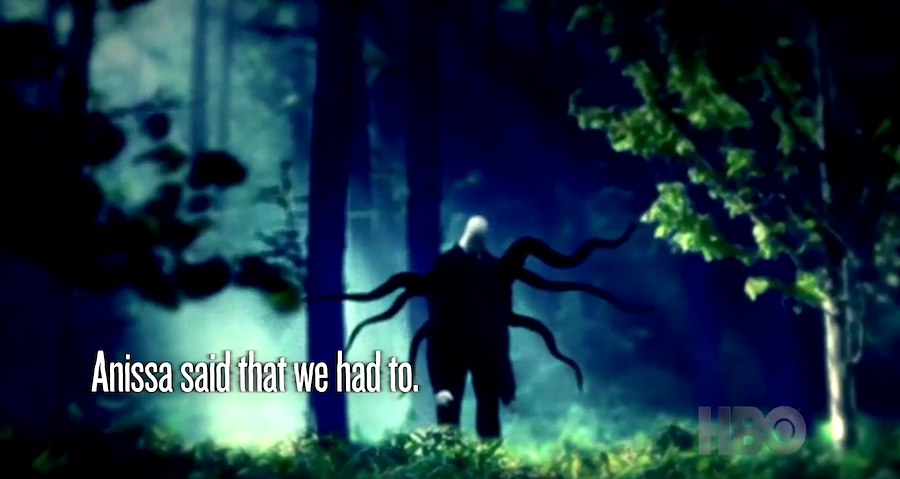 The Internet can be a horrifying place at times. Our history of passing information along has been a less peaceful transition than any election. In 2014, things came to a head in a town called Waukesha, Wisconsin, when two 12-year-old girls, Anissa Weier and Morgan Geyser, stabbed their friend, Payton “Bella” Leutner, 19 times and left her to die in a ditch. Miraculously, Leutner was able to drag her severely injured body out of this ditch and to the side of a street where a bicyclist rode by and found her. Last week, HBO released a documentary on this case you can watch anytime on HBO Go calledBeware the Slenderman.

I’ll admit, I was not terribly familiar with the tall, pale, faceless, suit-wearing creature known as Slenderman before this case, despite first appearing in 2009 as part of a Photoshop contest for a website called Something Awful. When this case first broke out in 2014, it caught my attention because the 12-year-old girls who committed the attempted murder were going to be tried as adults, something that perplexed me at the time. Needless to say, I looked up exactly who this Slenderman fellow is, and what this case is about, and that’s when I found out about this documentary being made. For many like myself, it’s been a long time coming.Beware the Slenderman premiered at SXSW in March 2016 and only just hit HBO last week. I took the first opportunity to watch it and I was not disappointed.

The documentary sheds light on the case by diving into the mental health of both suspects and their relationships at school, home life, and their current existence in prison today, as their case is still in court. It gives you their motives, which at one point were saving their families from the wrath of Slenderman but then evolved into their desire to become servants of Slenderman in his mansion. Luckily, it gives Slenderman rookies an eye into the many myths around him -- how they come about and the kind of fan base surrounding him.

It’s an interesting look into our multi-media world and how you can type in “real slenderman sighting” to find hundreds of videos with this creature appearing, even though it was all made up as a way for somebody to test out their Photoshop skills. It says a lot about the nature of storytelling, fandom, and how it can go totally awry in the wrong person’s head. When watching this, I thought a lot about how the internet can really suck people in, but that’s the thing -- it’s not just the internet. The documentary even makes a stunning parallel between Slenderman and another "folk" character, the Pied Piper, a man with a magical flute who uses it to lure rats out of a town to certain death, as well as children to an unknown fate. Many times, the child abduction is left in the many retellings of this story. It’s even the premise of an old episode of “The Simpsons” called “Whacking Day”, about a tradition of the townsfolk beating snakes to death with clubs but then using music to get them out.

Things like this also made me think about when fans do awful things like this because of a movie they saw or video game they played; people rally around the punishment of the artists as well. Obviously they never actually get punished, but they still get blamed. A story like this, that has been posted routinely on a horror story forum known as Creepypasta, has nobody to point at to be at fault. All different people who have never met each other and could be dead for all we know write the stories, and they all write them differently. When catastrophe like this strikes, though, there is no one left to blame other than the people who committed the crime. But it’s still not that simple...

The documentary does what a good documentary should do -- gives you unbiased facts as you look into the case and this internet culture of horror stories and memes. Did the girls do this because they’re mentally unstable? Is the internet to blame? What drove these girls to do it? Are they too young or not sane enough to stand trial as adults? It’s all up to you (well, really, a judge and jury) as to what the right answer is, but don’t watch this thinking the documentary will give you a cut-and-dry answer. This one will require some thinking on your end too.

Unfortunately, the one thing that this documentary does not get into is the victim. Leutner’s name is mentioned, some details of her life are given, and a home video of her is shown; however, neither she nor her family appears. It’s never addressed, but mature viewers can understand that this girl and her family would most likely not be ready to talk about what has happened in a documentary setting. To be in one is not like the TV appearance the Leutner and her parents appear in below. It’s a lot more hours on a subject they probably aren’t too keen on revisiting too much.

Check outBeware the Slenderman on HBO Go or HBO Now. Just don’t steal it or else somebody will get you… most likely the person you’re stealing from.