He's Back! Howard the Duck Getting a Reboot from Marvel! 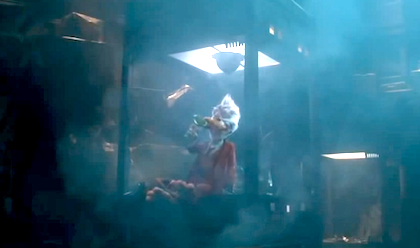 Remember that cameo by Howard the Duck at the end of Guardians of the Galaxy this summer? Apparently, it wasn't just a random appearance. Marvel is actually bringing back Howard the Duck to star in his very own comic book series. For those of you who have never heard of Howard the Duck, allow me to share this detailed explanation: He is a duck named Howard. All kidding aside, there is actually more to the character, including quite a bit of information that was not incorporated into his insane 1986 movie.

Howard the Duck first appeared in the 1970s, in issue #19 of Adventure into Fear. Originally from an unknown planet, Howard was dropped into the middle of the Florida Everglades and somehow wound up in Cleveland, Ohio (funny, because it's usually the opposite, amirite?). From there, he battles Garko the Man-Frog (I am not making this up) before going on a slew of wacky adventures. His travels lead him to battle the Gingerbread Man, Turnip Man, and the Kidney Lady (again, not making any of this up), in addition to learning quack-fu and getting nominated for the President of the United States. That’s certainly a lot for any superhero, let alone an water fowl from another planet (I thought you had to be born in America to run for President...). His adventures are meant to be biting social satire, so perhaps in the modern age, Howard the Duck will mock Snapchat and whatever teen dystopian series takes over next.

This new version of Howard the Duck will be closely tied into the Marvel universe, specifically the universes of Dr. Strange and Spider-Man (because Howard the Duck wasn’t weird enough). Howard’s alien origins will also be played up, as well as his sci-fi leanings.Sex Criminals co-creator Chip Zdarskywill pen the new comics, and Joe Quinones will take care of the art.

The film version of Howard the Duck is even stranger than the comic version (various stuntmen play Howard while donning a giant duck costume), so I feel that it might warrant a place in my Movie Guilty Pleasures series. I am intrigued to read the new comics, just to see what sort of villains he battles. My bets are on the Mad Kale Man and Crazy Plastic Bag Lady.

Are you excited for the new version of Howard the Duck?