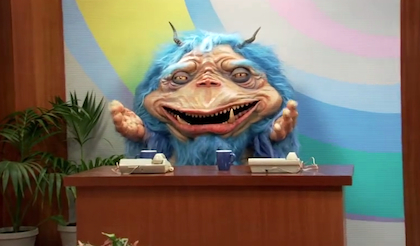 Blood, foul language, and interviews with musicians -- that is just some of the fun stuff you’ll see on “The Gorburger Show” when it hits HBO soon! But you can check it on weekdays whenever you want right this moment, as the original webseries is streaming free on Youtube and Funny or Die!

I’m sure you’re asking yourself, “Wait… am I supposed to know what ‘The Gorburger Show’ is?” The answer is yes… you absolutely should. Gorburger is an alien creature of unknown origins that has come to Earth and invaded a Japanese morning talk show. Upon his arrival, he ate half of the cast due to his uncontrollable blood lust, and he uses the surviving cast members, such as the aerobic team Tokyo Fever, to assist him on the show despite not speaking a lick of Japanese. Now, having taken over the show, Gorburger interviews musical acts, sometimes letting them play their music, sometimes having other musical acts play their own music, games, demonstrations, blood lust, and, of course, hitting on the female guests… You know, a pretty typical talk show, all things considered.

Something very interesting about Gorburger is that his voice sounds just like that of T.J. Miller’s. That stands to reason, because Gorburger is actually a puppet for which Miller is hired to voice. (We still have no proof of aliens.) You may know Miller from his work on Big Hero 6 and HBO’s “Silicon Valley”. (Aha! The HBO connection! I’m pretty good at deductive reasoning if I do say so myself.) Miller is not only a member of the HBO family, but he is also a friend of YH. Check out our profile on the funnyman where he reveals his secrets behind the nuances of comedy:

No HBO premiere has been finalized for “The Gorburger Show”, but what we do know about the show is that HBO has ordered a pilot from Miller and his team, which marks the second webseries ordered by HBO this year after “High Maintenance”. But enough on those kinds of details… You must want to see for yourself what “The Gorburger Show” is all about, right? Like I said, the episodes are for free on Youtube and Funny or Die, so get your lazy fingers to typing… or check out the clip I set up lovingly for you below, because I’m a good guy like that. I recommend starting on episode 1 and marathoning the NSFW content all day to episode 19: