Have You Taken the ALS Ice Bucket Challenge Yet? These Celebs Have! 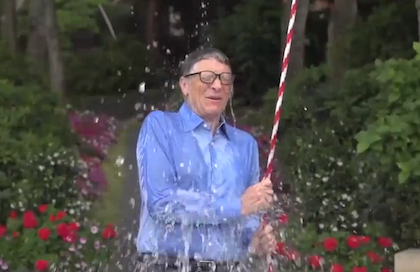 Anyone with a smart phone, internet, or a Facebook account nowadays has more than likely heard of the ALS Ice Bucket Challenge, a campaign going viral around social media. Various celebrities have joined the cause to help spread awareness of ALS (amyotropic lateral sclerosis), a disease that causes muscle weakness, attacks the nerve cells, and can lead to paralysis and even death.

Different versions of the challenge have been making it around the internet. The most common way someone becomes a part of it is by being nominated by someone else. In one of the more common incarnations, the nominee has 24 hours to donate $100 (or more) to the ALS Foundation, or they can opt out OR donate $10 AND dump a bucket of ice water on their head. They capture all of this on video and in turn nominate a few more people to participate. Many celebrities have been raising the bar by donating $10,000 as well as completing the challenge. The ALS Foundation has stated that, since the Ice Bucket Challenge started July 29, they have raised over $20 million more than last year with over 70,000 donators!

Many of Hollywood’s hottest stars didn’t hesitate to take on the challenge. Famous rapper Drake was nominated by a few of his Young Money associates. He accepted the challenge on stage while in Pittsburgh and allowed Lil Wayne to pour the ice water over his head. He then nominated Beyoncé.

Even some of the our famous billionaires accepted the challenge. Mark Zuckerberg took the challenge and then nominated fellow billionaire Bill Gates and the CEO of Netflix.

Oprah Winfrey was challenge by Tyler Perry, which she did with the help of her friend Gayle King. The expression and shriek she gave as the ice water was dumped on her head made it clear that she forgot it would be cold! But that didn’t stop her from nominating Steven Spielberg and threaten to come get him if he didn’t.

As for Spielberg, he heeded the call:

Some celebs even did it twice, including Justin Bieber. The first time around, he nominated Ellen Degeneres, Barack Obama, and Chris D'Elia. The second time, he nominated all his "Beliebers":

But the most creative and entertaining video so far has to go to Dave Grohl, who made an entire parady of the movie Carrie out of it:

The silly videos of  our favorite celebrities like  Lady Gaga, Chris Hemsworth, Lebron James, and more are definitely fun to watch, but this campaign means so much more to all the families and people who have had to suffer with ALS. ALS patient Tim Robertson says, "The more people who know about it the better," and one wife of an ALS patient adds, "I will be happy for you and every Facebook like you receive as you nudge ALS an inch or two closer to collective public consciousness."  What a fun way to help, don’t you think?

Have YOU taken the Ice Bucket Challenge yet? Which celeb video is your favorite?