Have the Best 'Worst Christmas Ever' with Grumpy Cat! 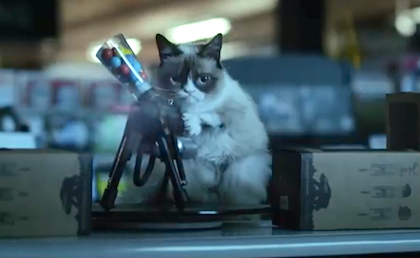 Halloween is over, and you know what the means… It’s time to start celebrating Christmas for the next two months! And I’ve got the puurrrfect way to celebrate Christmas (please bear with me through the horrible puns). On November 29, Lifetime is premiering a movie at 8 o’clock PM that is very much out of the realm of their usual enraged husband murder and human trafficking plots. Instead, Lifetime will be premiering Grumpy Cat’s Worst Christmas Ever! It’s a wonderful tale in which a lonely girl finds the friend of a lifetime (see what I did there?) in Grumpy Cat, just in time for the holidays.

That’s right, the Internet has proven that memes and cat videos are a major part of mainstream pop culture, so much so that Grumpy Cat will be starring in her own feature film. The frowning feline might be a huge star, but she definitely needed a little help in this role, since, you know, she can’t speak human English, being a cat and all. Knowing that she would need help expressing herself verbally in this role as herself, she enlisted “Parks and Recreation” star Aubrey Plaza to represent her vocally. Plaza is known for her dead-pan voice and dry wit, which is prrrfect for Grumpy Cat, since that is how she speaks to other cats all the time. Alright, enough of me writing about it, let’s get to the trailer that was just recently released:

As expected from the title, and generally the type of feline Grumpy Cat is, you can tell that Grumpy Cat will come out of the gate hating Christmas. But with the help of her co-star Megan Charpentier, Grumpy Cat is guaranteed to end up feeling less amount of hatred towards Christmas by the end, but still resent the holiday a good amount. I know what you’re saying, “It’s a movie, she’ll end up loving Christmas when the credits roll.” You’re wrong! This is Grumpy Cat we’re talking about here. She’s always grumpy. There’s no rhyme or reason why she is grumpy other than the fact that she was born with a permanent sour puss, as well as a deep hatred for anything that doesn’t involve sleeping. If I were Grumpy Cat, though, I’d be stoked that I’m a cat driving a car and firing off paintballs, but to her it’s just getting in the way of her endless search for more sleep. Oh well, guess I’ll just be a person and do all of those things whenever I want, rendering them as the uneventful tasks of everyday life.

No matter what, though, folks, remember: Halloween is over! It’s done! Gone! Stop celebrating it. It’s not coming back… until next year. So gear up for Christmas at your local CVS and watch Grumpy Cat’s Worst Christmas Ever on Lifetime at 8 o’clock PM on November 29! Until then check out a clip of Grumpy Cat going head to head with the grouchiest creature on Earth, Oscar the Grouch!