#HashtagHysteria! One For Every Day of the Week and More! 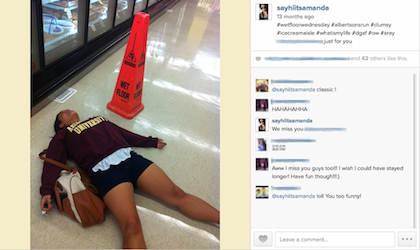 From Twitter and Instagram to Facebook and Tumblr, the #hashtag has made its way through all networks of social media. The hashtag has not only taken over social networking sites, but is a huge marketing tool used by television programs, movies, celebrities, and even businesses by having their viewers and audiences tweet them directly using this hashtag system.

For those of you who still don’t really understand what this whole hashtagging craze is about, let me explain. The hashtag, or “#”, gained popularity on Twitter. By placing the “#” before a word or phrase without spaces (i.e. #younghollywood, #BeyonceIsQueen), others in the Twittersphere can browse through the latest tweets with the same hashtag, making it easier to look through various topics.

“Why would you want to do this?” my parents asked me.

I thought about it and I explained to them. This allows you to see what topics are currently “trending” in your area or worldwide to see what everyone is “hashtagging” and to see what they are saying about said topic. For television, movies, and other media, it’s a great way to publicize your project as well as quick and easy feedback about your show or program. It’s also a great way to get viewers involved. Some television shows, like "Pretty Little Liars", even show live-tweets using a specific hashtag that they ask their viewers to tweet!

Jimmy Fallon even has his own segment on his late night talk show, “Late Night Hashtags”, where he asks his viewers to send in their best stories through Twitter that fits his weekly hashtag.

Here’s one of my favorite Late Night Hashtags.

The hashtag has been quite useful on Instagram too. For those of you who have seen various hashtags, like #mancrushmonday or #throwbackthursday, and have no idea what it means, I am here to explain all the popular hashtags for every day of the week and how to make a hashtag of your own!

Let’s start with the first one I mentioned earlier, #ManCrushMonday. I didn’t realize that I needed a day to profess my crush on the hotties in my life, but apparently that day would be Monday. For this hashtag, just post up a picture of your guy crush and throw up the #mancrushmonday, or #mcm. Even guys do this, which makes it so much more interesting! It can be a Hollywood celeb like Zac Efron. Oh, hey Zac. Or it could be one of your guy friends who is always there to take you out on a McDonalds run!

Next up, #TransformationTuesday. This is used to show change from an earlier point in time to now. Many use this to show their result from dieting or working out with their before-and-after pictures. But it could be anything that has undergone a transformation, hence the hashtag. It could be your room from when you were 8 years old to when you’re 18. It could even be a transformer if you really wanted to! Be as creative as you can!

Wednesday doesn’t have a definitive hashtag, but one that I really enjoy looking through is #WetFloorWednesday. This is exactly what you would imagine it to be. Pictures of wet floor signs of all kinds, yellow ones, oranges ones, red ones. People usually lie down on the floor next to the sign for more laughs! I, myself, have done this hashtag, I admit it (see pic at top of page). But there’s also #WayBackWednesday and #WomanCrushWednesday available for your hastagging needs.

Probably one of the most popular hashtags EVER is #ThrowBackThursday, or #TBT. This hashtag lets everyone go back in time and post up a picture of themselves, their friends, family, anyone or anything that is from the past. Let the nostalgia kick in! But you can also post pictures of lava lamps or magic eight balls. Anything from the past works, just don’t forget to use the #throwbackthursday! There’s also #ThirstyThursday and #Thursdate.

If you miss #throwbackthursday, don’t worry because the next day is #FlashbackFriday. Same rules apply except usually the posts are more recent like a flashback from last week or even from this morning but not always! As long as its not right now, you can use the #flashbackfriday, or #fbf.

Last but certainly not least is #SelfieSunday. Probably the simplest hashtag ever! Just take a picture of yourSELF! No shame for these selfies, because we have a designated day for them.

So, how do you make up your own hashtag? Just think of something that anyone and everyone can relate to and think of a clever name that starts with the same letter as the day of the week or a play on words! Remember, the more relatable the hashtag, the more people will use it!

There you have it! A simple and easy guide to #thehashtag! Hope this clears a few things up! #YoungHollowood #StayFreshEverybody #AmandaOut