Han Solo vs Indiana Jones: Who Would Win? 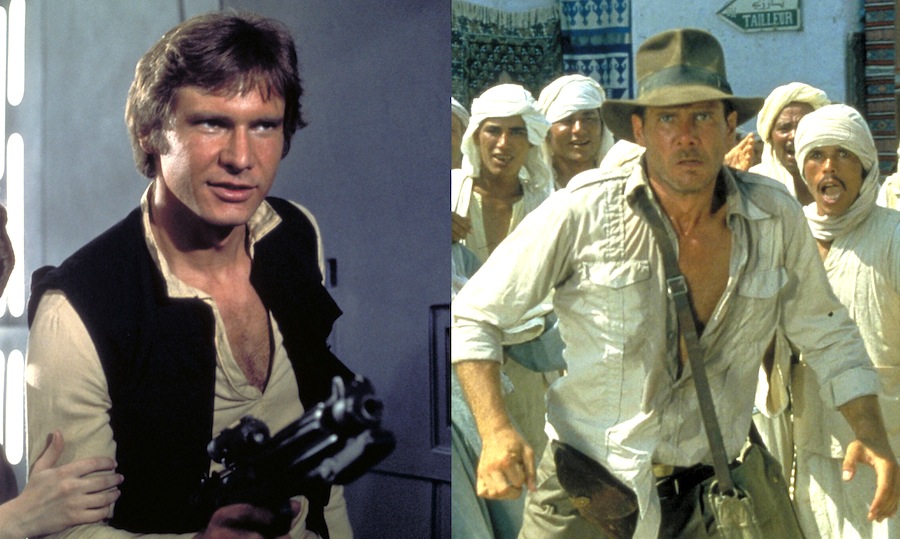 Two of Harrison Ford's most iconic roles are experiencing somewhat of a Renaissance lately. While we wait for the official announcement as to which lucky young actor will guide the Millennium Falcon in the upcoming Han Solo origin movie, we have also learned that a fifth Indiana Jones movie starring Ford himself has been greenlit. People are curious if the new Indiana Jones will be good since Kingdom of the Crystal Skull left many fans sour, and fans are speculating on many facets of this Han Solo origin movie, but nobody is asking the real question here: Who would win in a fight between Indiana Jones and Han Solo?

There are many things to keep in mind when speculating about this, one of which being: Which Indy and Han? The Indy and Han in their primes, or the current, much older incarnations? For the sake of this hypothetical, we're going with Prime Time Indy and Han; though, regardless of their ages, I’m sure a lot of people are reading this and saying Han Solo wins because of space weapons.

True, he has a laser gun that makes cool noises; sure, he has a space ship; and sure, there’s a plethora of explosives he has used the likes of which Indiana Jones has never seen... However, we have no idea how much stronger any of those things are (the Millennium Falcon, of course, is very strong regardless), as Star Wars takes place a “long, long time ago”. Key word is “long”, meaning all of those weapons might actually be garbage, like muskets during the Revolutionary War. All I’m saying is, maybe those laser blasters aren’t as powerful as we may think. But for the sake of conversation, this scuffle between the two of them takes place when the Millennium Falcon understandably stalls and crash lands on Earth in the 1930s shortly after Indy is party to when (spoilers!) the Ark of the Covenant melts the faces off a bunch of Nazis. In this case, Han Solo emerges from the ship and begins to hit on Indy’s former lover, Marion Ravenwood (because of course he does, he's Han Freaking Solo).

At first, Indy will feel upstaged by Han’s superior skills in wooing a woman (or “game”, as the kids call it these days), causing Indy to challenge Han to a duel. Han tries to dismiss the eager Indy by stating he is a lover and not a fighter, until he realizes that Indy is as attractive as he is but in a more rugged sort of way. “There’s only room for one scoundrel in this galaxy… Wait. What galaxy am I in?” Han would ask. Indy would laugh at what an imbecile Han is and take pity on him. As Indy walks away, Han would call him out for being Bantha fodder and a Nerf herder, and just like the Ivy League graduate Indy is, he gets mad at not knowing what that means. Han explains that it’s kind of like a “space chicken” and “space trash”. Indy doesn’t care. The insult stung enough without explanation and the fight is back on.

Using all their tricks and cunning, the battles ensues with neither getting a good shot at the other. Indy’s whip skills aren’t an even match for Han’s swiftness as he can’t land a blow. Finally, when they come face to face and shoot at each other, Han’s laser beam and Indy’s bullet collide with each other and creates an explosion. The two see that they are evenly matched, shake hands, and exchange how they each hate but respect each other. But they need a way to settle this. The dust from the explosion clears, showing that it actually created a rip in the space-time continuum, and Indy’s sidekick from Temple of Doom, Short Round, appears. He greets Indy asking where he went? It’s clear he’s been looking for Indy for a while and the tear brought them together again… much to Indy’s dismay, obvs.

Han comes up with an idea on how he and Indy can settle this -- he proposes that they let their sidekicks square off instead. With no hesitation or even so much as a description of Han’s sidekick, Indy aggress. “Chewie! Stop fiddling with the hyper drive and get out here!” Han yells. Chewie growls back. “If you’re that frustrated with the maintenance, then you can come out here and rip this kid’s arms out.”

“What?” Short Round trembles in fear. Indy winks at the young adventurer, assuring the young man that he's got this.

Chewbacca emerges from the Millennium Falcon looking angrier and hairier than ever. He towers over the young Short Round. As Han calls for the fight to begin, it ends almost as quickly as it starts as Short Round is torn apart to pieces by the furry dog-faced beast, while screaming “Doctor Jones!” as his final words in complete agony. The fight is over. Han won. The two men, who both share the flawless face of Harrison Ford, shake hands, agree to meet up sometime and possibly grab a beer, or maybe even a space beer.

So, there you have it. In a fight between Indiana Jones and Han Solo, it is clear after all that Han would win, but another questions remains -- Is it is only settled by the fact that Chewbacca is a sidekick unmatched by any other sidekick, or was it Han’s cunning in seeing the dismay in Indy’s face that gave him the “W” today? We may never know, but I’m sure even if Han fought Batman and it came to a match between Robin and Chewbacca, it would end quite similarly. Anywho, be sure to keep looking as we will update you more on the battle of whether Indiana Jones or Han Solo hit theaters first!