'Guardians of the Galaxy' Spawning an Animated Series for Disney XD 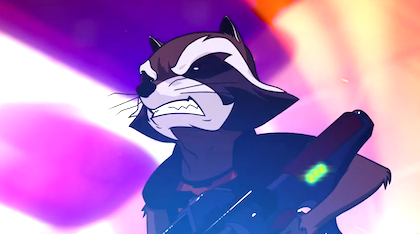 In Marvel’s continued quest to take over the universe, there will be a Guardians of the Galaxy animated series. The show will make its debut on Disney XD next year, home of action-packed animated spin-offs including “Star Wars Rebels” and “Marvel’s Avengers Assemble” (supporting my aforementioned theory of Marvel's universal take-over). To get fans excited, Marvel released a clip of some test footage at New York’s Comic-Con last week:

The clip features everyone’s favorite wisecracking raccoon carrying a giant machine gun, so we can rest assured that the cartoon will include the best Guardian. Star Lord even makes a brief appearance at end, although he does appear to be a bit different from Chris Pratt. It’s also difficult to tell who the villains are in the clip -- are the Kree returning? Or is this unnamed drone a new and even more frightening foe for our heroes?

It is worth noting the animation style. It seems that the animators may have been inspired by anime rather than previous Marvel animations. It will be interesting to see how the anime style will affect the new series, or if indeed they plan to stick with this aesthetic at all. Let’s be honest though: all we really need to see is an animated dancing Groot.

Are you excited for the new Guardians of the Galaxy animated series?