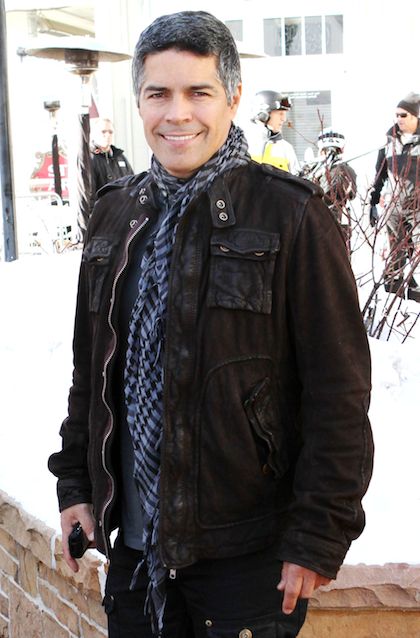 Hanging out in his L.A. home, occasionally distracted by his human-esque dog while patiently counting down the days until the premier of his new film, Gun Hill Road, at the Sundance Film Festival, self-proclaimed "Flexitarian" Esai Morales took some time out of his busy schedule to speak with YH about his family life, the environment, his career, and more.
A very animated and friendly guy, Morales jumped right into conversation. Complementing the beautiful day and how he longed to be outside, Morales is quite athletic. A fan of baseball and softball, Morales has been playing tennis for the past four years and loves it. Even though the sunshine was calling him out to play, we were still able to get to know him a little better.
As a Puerto Rican born in Brooklyn, NY, Morales calls himself an “honorary Chicano” because of his varying roles portraying Mexicans, in particular his breakthrough role as Bobby Morales in the 1987 hit film La Bamba. Esai described his work on Gun Hill Road as a bit of a homecoming, playing a "NewYorican." In September 2010, Morales added the role of father to his ever-growing resume/ When asked how fatherhood is treating him, he replied, "Well, thank God that I have a great co-producer who is amazing, and if it weren’t for her, it would be a little more daunting. But there is nothing like coming home to this face that looks at you, registers for a second, and gives this two foot smile.” His delight was palpable, even over the phone!
As a humanitarian who has been involved with many different endeavors, Morales helped found the National Hispanic Foundation of the Arts in 1997, an organization which advances the presence of the Hispanic population in the media and other fields. Morales also feels very strongly toward the preservation of the environment. In his messages concerning environmentalism, Morales quotes his mother: "'Leave it the way you found it.' Those values I’ve made my own by keeping them alive. We live on this Earth for an X amount of years, but what are we leaving our kids when we are gone?" This attitude led him to becoming a founding board member of the Earth Communication Office. Currently working on presenting ways to teach anti-cruelty in schools, Morales believes in the importance of children being taught to "value life and cherish it... I find it really sad that young kids are growing disconnected more and more to our society at large."
Esai was a recent recipient of the Dream Award from Hollywood Arts, an educational organization fueled by the arts to help homeless at-risk teens improve their self-esteem and develop skills to prepare them for real world experiences. It is obvious that Morales strongly believes in the power of the youth. He says, "It’s cool to see young people connected to their own future. Whether they realize it or not, every little thing you do today adds up to where you are tomorrow." He even threw out his favorite John Lennon quote -- "Life is what happens to you while you are busy making other plans." -- while stating the importance of the young people today understanding that "every little act you do today, adds up to where you will be tomorrow."
Between the TV shows and movies Morales works on, he keeps quite the sense of humor. When asked what he would do if he was not an actor he responds: "A gynecologist I think... I’m just kidding. Let me think. I could be a singer, or a stunt man, a photographer... I had so many desires as a kid, but the reason I became an actor was because I could be many different things without committing to one. As an actor, I can taste different professions." Esai attended the School of Performing Arts in Manhattan and sees himself returning to the theatre at some point. "I don’t think anything replaces the immediate relationship between theatre actors and their audience." And besides singing, Esai looks forward to wearing the hat of a producer and director in the future.
After about an hour of conversation, Esai leaves us by assuring "My best work is yet to come, and hopefully other people will agree." We certainly do!
(Image via CXA/ZOJ/WENN)
- Kellyé West, YH Staff