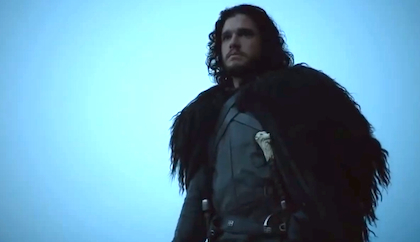 I should have known better. When it was first announced that HBO would be screening the last 2 episodes of “Game of Thrones” in IMAX theatres across the country in addition to an “exclusive” first trailer for Season 5, I, for some reason, trusted that that trailer would remain just that – a theatrical exclusive. So, I bought my tickets to a screening for this past Saturday at the Chinese Theatre in Hollywood, two days after the official premiere. I think you know the ending to this story – by the time I showed up to the theatre on Saturday night, the Season 5 trailer had been online for two days already.

But I resisted the temptation of watching it ahead of time, because I paid twenty bucks for those tickets and I was gonna get my money’s worth, dammit! So, YES, I am late to the game, but I had very good reasons.

In case YOU haven’t seen it yet, peep it below:

As someone who has also read the books, I spotted maybe, oh, 3 things in the entire trailer that actually look book-canon. Everything else? Hell if I know! Like:

- What the heck is Jaime Lannister (Nikolaj Coster-Waldau) doing in Dorne? In the books, Cersei sends him to the Riverlands to see to some sieges and stuff (remember, Edmure Tully and his uncle, the Blackfish, survived the Red Wedding and are now hostages in their own castle; seems like something they might wanna address?). I can only assume that, on the show, Cersei (Lena Headey) sends Jaime to Dorne in order to check up on their daughter, Myrcella (Nell Tiger Free), who is betrothed to Trystane Martell (Toby Sebastian).

- Why is Varys (Conleth Hill) in Braavos with Tyrion (Peter Dinklage)?? In the books, Varys all but disappears after he helps Tyrion escape King’s Landing, not showing up again until the Epilogue of the last book (and it’s quite a return, lemme tell ya!). At the end of the trailer, it’s implied that Varys is concerned with putting Daenarys (Emilia Clarke) on the Iron Throne. This seems to be compensating for (SPOILER ALERT!) Varys’s scheme to put a kid named Young Griff on the Throne, who claims to be Aegon Targaryen, the son of Prince Rhaegar Targaryen whom everyone assumed was dead and would be Dany’s nephew. This plot is basically Varys’s entire raison d’etre, but since the showrunners have cut out the Young Griff storyline, I guess Varys’s purpose is now focused on Dany.

- It also seems like Tyrion’s entire storyline in Essos has been completely retconned. In the books, he actually travels with Young Griff and his guardians for a significant amount of time before hooking up with Jorah Mormont (Iain Glen) (whom Dany banished) and a dwarf girl named Penny and they all become basically a side-show act. All of this seems to be abandoned in favor of a Varys/Tyrion road trip. This would also explain why we see Jorah in the fighting pits getting his gladiator on instead of getting comedically poked in the butt by Tyrion riding a pig.

- Don’t even get me started on what’s happening with Sansa Stark (Sophie Turner) and Littlefinger (Aidan Gillen) in the Vale. In the trailer, he tells her to “Avenge them.” I can only assume that she shanks him in the chest 2 seconds later, since Littlefinger is responsible for basically every crappy thing that has ever happened to Sansa? Let me be CRYSTAL CLEAR on that, in case anyone has forgotten – PETYR BAELISH BETRAYED SANSA’S FATHER, NED STARK, AND FRAMED SANSA FOR JOFFREY’S MURDER AND IS NOW CREEPING ON HER LIKE A MEGA-PERV BECAUSE SHE LOOKS LIKE HER DEAD MOTHER WHOM HE WAS IN LOVE WITH. I really don’t think I can stress that enough. And for Sansa to be “using her sexuality to manipulate Littlefinger” goes against every fiber of Sansa’s being as a character, and that’s not even book-canon. So, for anyone who is actually rooting for this “relationship”… Ew. Please stop. Gross.

Anyhoo, speaking of the books, looks like we’ll be getting no satisfaction on that front either, as author George R.R. Martin has announced that the sixth book in the series, The Winds of Winter, will definitely NOT be coming out this year. Not only is that groan-worthy from a book-reader’s standpoint (the last book, A Dance of Dragons, came out in 2011), but it also makes the show’s future uncertain, in that Season 6 will be made up of entirely new material that NOBODY will have any prior knowledge of. You see, Season 5 will basically wrap up the last 2 books (which follow roughly the same timeline), so the writers will have no choice but to continue the series without an actual published book to base it on. Not that that will stop them or anything – the TV show has been diverting from the books more and more with every season, so by the time we get to Season 6, we won’t even know if what we’re watching is what we’ll eventually be reading in TWoW. Odd little dilemma, that.

But there is one MAJOR turn of events that fans have been waiting for which may finally be coming to light this season...

On the IMDb Pro page for Michelle Fairley, who played the late Catelyn Stark, she is listed as "Hooded Woman" for the Season 5 finale. I think you all know what that means... (if you don't, read the books!!!) Now, I must add another disclaimer that IMDb can be updated by anyone, so there's a chance we might just be getting punked. Hopefully not, but I will definitely keep my eyes and ears open for y'all!

Michelle Fairley's rep has stated that this was indeed a hoax and that IMDb is in the process of removing the credit listing. SHUCKS!

In the meantime, Season 5 of “Game of Thrones” premieres on April 12 on HBO.