FX's "What We Do In The Shadows" Will Pick Up Where Taika Waititi's Cult Fave Mockumentary Left Off! 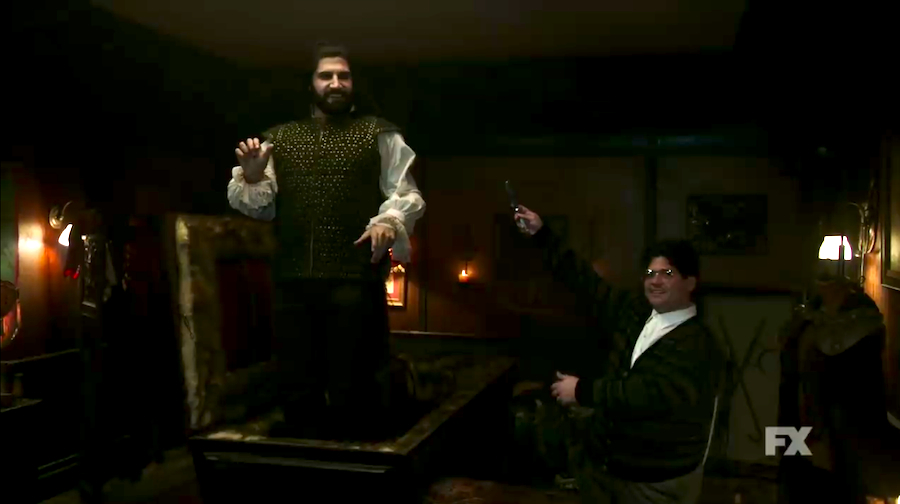 In a dark and dingy mansion in Wellington, New Zealand, a house of vampire flatmates changed the world. By being in a documentary, they showed the world that vampires are just like us—only with a bit more of a lust for blood and a sensitivity to sunlight. Now, prepare to have your eyes opened even further, because tonight (March 27), our understanding of vampires is about to get a whole lot better. Who knew vampires were so relatable?

Of course, I’m talking about What We Do in the Shadows, a mockumentary that came out in 2014 and quickly became an underground cult hit. Taika Waititi and Jermaine Clement were its writers and directors and also starred in the film as 2 of the 4 vampires who all share a flat together and attempt to navigate life in the 21st century, including modern technology. Waititi went on to direct Thor: Ragnarok, which is why it’s the quirkiest and silliest (and best) Marvel movie to date.

If you love What We Do in the Shadows for its witty and ironic take on the vampire mythos, there is very very good news for you. Its creators have created a spinoff series for FX!

Usually the word "spinoff" sends shivers down my spine, but this time I have a very good feeling, and it’s not because I’ve been hypnotized. With the original creators on board, a new cast, and a new location (Staten Island, New York), this spinoff looks like it will hold up just fine to the original. Bets are that we're in store for many absurd and funny moments that just didn't fit into the original movie. And considering how much material is imaginable in the world of ancient vampires living in modern times, it’s likely going to feel more like a continuation of the original film than a weird side story. Plus, these new characters look just as lovable as the original cast -- who are likely to make guest appearances, by the way.

These new vampires still have familiars, including Guillermo, who kicks off the trailer by opening his master’s coffin/bed. There are 3 old and classic vampires -- Nadja, Nandor, and Laszlo -- who haven't updated their fashion sense for a few centuries. Then there’s a new kind of vampire, Colin Robinson, who calls himself an “energy vampire”. He sucks people’s energy by boring them or enraging them, especially his co-workers, which is the most believable part of this series so far. I think we’ve all come across an energy vampire once or twice.

Vampires never go out of style, even if their clothes do. This fresh take on the vampire genre feels like the continuation of one of the best things to happen to this timeless mythos. We will be tuning in to see if they finally complete their dream of world domination, and if they can get along with the American werewolves. Us humans are rooting for you guys!

"What We Do In The Shadows" premieres TONIGHT at 9pm on FX!