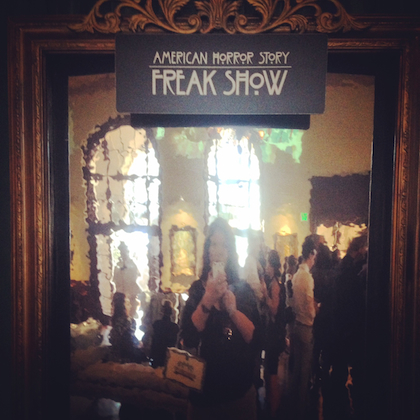 The FX Network, along with dining club TRUFFL, pulled out all the stops Sunday night to celebrate the premiere of “American Horror Story: Freak Show” with an invite-only event at the Ebell Theatre in Los Angeles, and they put on quite a show!

I’m not even quite sure how I got an invitation, but it was too good to pass up – cocktails, amusements, a multi-course dinner prepared by Wolfgang Puck, and a private screening of the pilot episode of AHS:FS. I’ve been DYING to see this new season, for the very simple fact that it takes place in my hometown. I brought along my mother so that we could judge together how well they captured good ol’ Jupiter, Florida, U.S.A.

The evening started with some socializing in one of the fancy ballrooms at the Ebell and in the garden outside, featuring show-themed cocktails and bow-tied servers handing out cold crab claws, mashed potato & caviar shooters, duck bao buns, popcorn balls dipped in liquid nitrogen, and chicken liver pate on a stick encased in cotton candy. (I know, WHUT?) 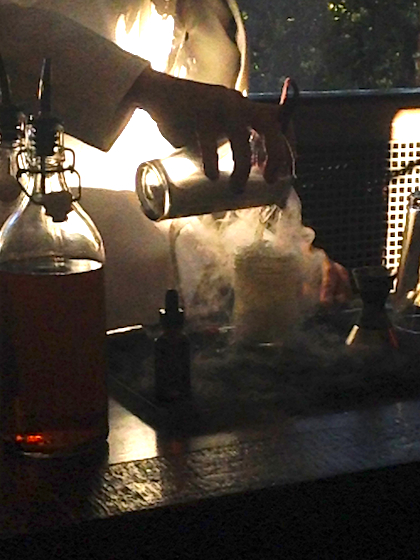 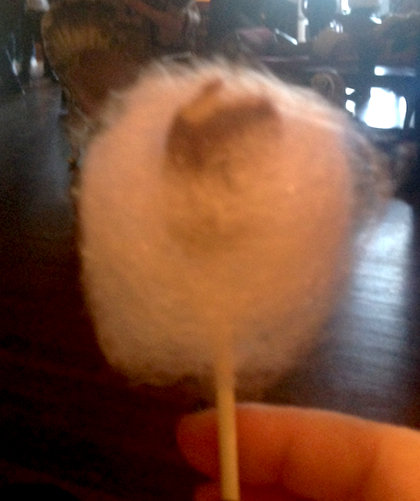 Also mingling amongst the 100 or so guests were some freaky-deaky performance artists, including a creepy guy on stilts, some contortionists, and a girl with a huge python coiled around her (which I petted, heehee). We all enjoyed some snacks and some incredibly bendy people while listening to the stylings of Aaron Durr and his band, who played torch song covers of contemporary pop hits (you haven’t lived until you’ve heard the jazzy version of “Blame It [On The Alcohol]”). 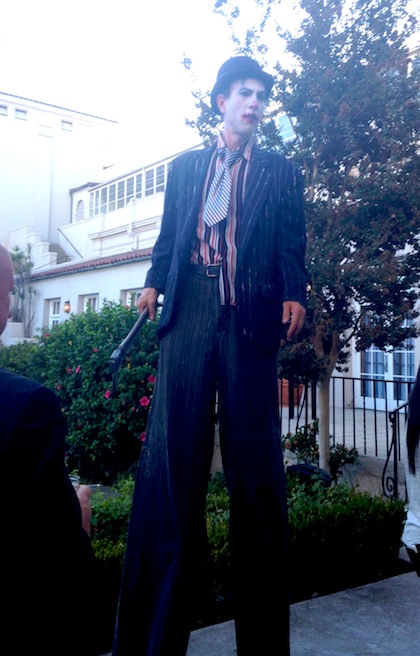 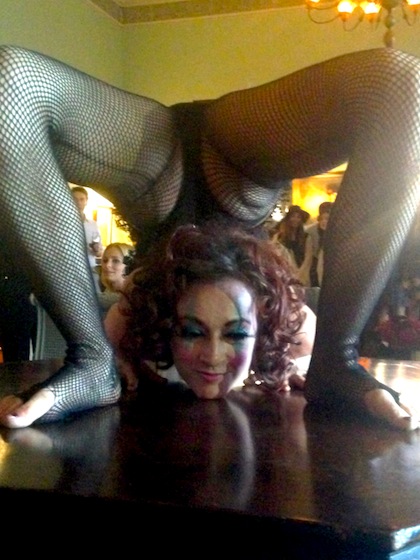 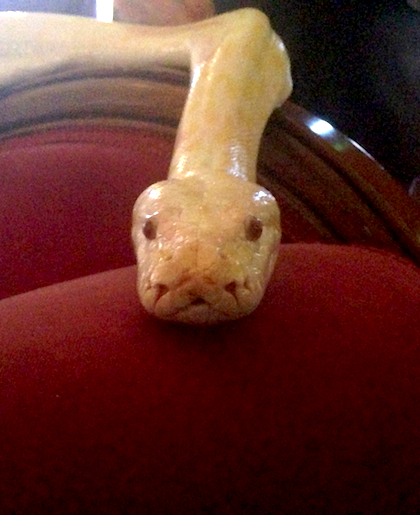 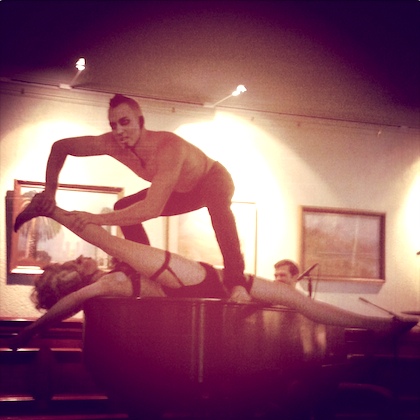 A scary carnival barker then ushered as all into the main theatre, where the chairs had been replaced by lush sofas of red velvet, black leather, and black-and-white silk. 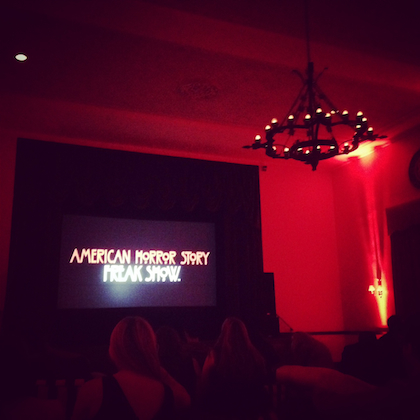 There we got to view the premiere episode of AHS:FS on the big screen. I won’t give away any spoilers, but here are some of my impressions…

First of all, I am not sure why they set this in Jupiter when there is absolutely no visual indication of the town itself. Not even any B-roll of our world-famous(?) landmark, the Jupiter Inlet Lighthouse. The season was actually filmed in New Orleans, and indeed, it looks more Louisiana than Florida. And none of the characters looked sufficiently sweaty/oily as people who spend a great deal of time outdoors in Jupiter during September ought to. And at one point, we see a title card that reads: “Lake Okeechobee: On the Outskirts of Jupiter, FL.” Okay, sure, if you consider, say, Santa Barbara “on the outskirts” of Los Angeles. And it looked NOTHING like Lake O to boot… It looked more like the Everglades. (Here’s a reference for when the show airs and you can see what I mean.) There was also a huge house at the very beginning, the likes of which I have never seen in Jupiter, and there was also a huge hospital, which is definitely erroneous because Jupiter has only had a hospital within my own lifetime.

I will give kudos to the sound mixer, though, for capturing some authentic Florida ambient sounds though (the incessant buzz and chirping of bugs and birds). So there’s that.

As for the show itself, I don’t have too many complaints. As with previous seasons of AHS, this one is a feast for the senses and keeps you on the edge of your seat. And any time you have Jessica Lange and Kathy Bates sharing the screen, you know you’re in for a treat. Of course, Sarah Paulson and Evan Peters are great too, as always. And can we talk about Paulson’s double-duty for a sec?? Holy crap, you guys, the special effects are FLAWLESS. I was very impressed with that. There’s also the obligatory Jessica Lange musical number too, which was actually pretty entertaining.

A fair warning, though: if you have a clown-phobia, RUN. Run far, far away.

Following the viewing, we were then ushered into the main dining room, which reminded me of some kind of burlesque version of Hogwarts. 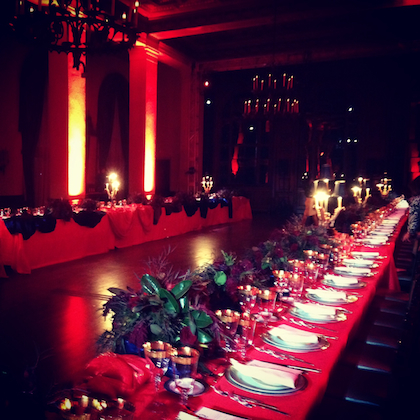 We were served by a wait staff who had apparently been trained at Downton Abbey, presenting us with 5 courses of what I like to think of as “gastronomic adventures”. 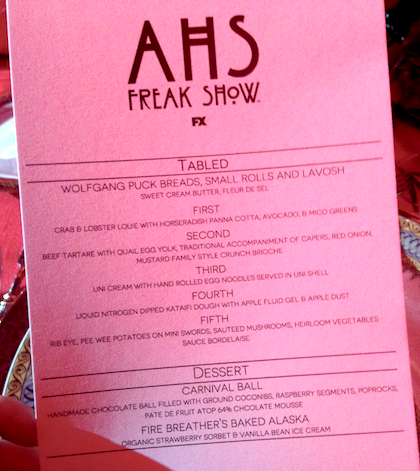 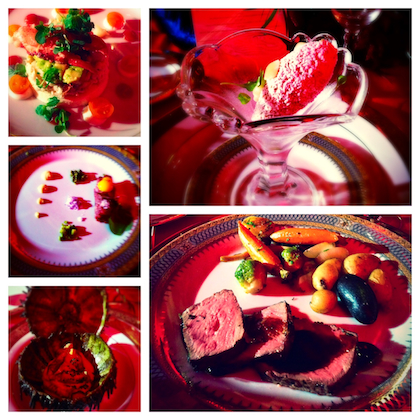 While we noshed, the “freaks” kept us entertained with some dancing, flipping, bending, balancing, snake-dancing, sword-swallowing, and all kinds of fantastic oddities. 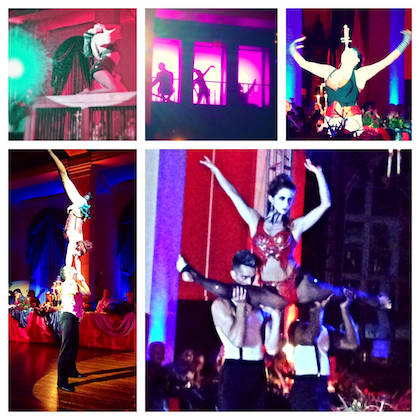 At the end of the night, we were each presented with a “special gift” wrapped in an Official American Horror Story: Freak Show Box™ --  inside of which was a black Viewmaster. I haven’t peeked into mine yet, but I’m sure it will be creepy.

“American Horror Story: Freak Show” premieres this Wednesday, October 8, at 10pm on FX. I definitely recommend you tune in; just take all the Jupiter stuff with a grain of sea salt.

(Photos via my iPhone)