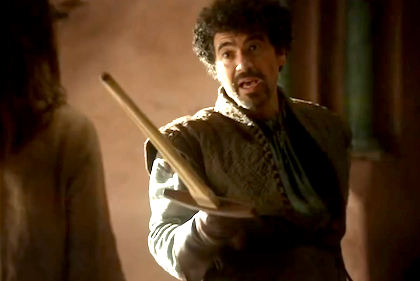 Miltos Yerolemou, known to “Game of Thrones” fans as Arya Stark’s water-dancing master from the Free City of Braavos, Syrio Forel, must’ve gotten J.J. Abrams's attention with his masterful swordfighting skills and landed (like almost all things with the new Star Wars film) an "unspecified role" in the upcoming Star Wars Episode VII film. Being a massive fan of Syrio Forel, I have no doubt that Yerolemou will be a great addition to the franchise in any capacity.

If you’re not a fan of “Game of Thrones”, let me briefly fill you in on the character Yerolemou played. Syrio Forel was First Sword of the Free City of Braavos, meaning that he is a foreigner in the “Game of Thrones” country of Westeros and is one of the best people in the world to wield a sword. With his flamboyant moves and overall eccentricity in his portrayl of Syrio, Yerolemou seems perfect to add some more fun to Star Wars Episode VII. Don’t take my word for it, though; check him out teaching Arya some important lessons below!

Cool guy, right? On top of his sick skills with a sword, you may have also noticed that Yerolemou isn’t a very tall man. Standing at 5’3”, he is sure to be pretty nimble as he rustles around combating Sith… or perhaps even Jedi. But will he be fighting anyone for sure? Given that his role on “Game of Thrones” was that of a sword master, I think it’s safe to say he will be fighting somebody with a lightsaber, but like I said earlier, we simply do not know for sure what his role is at this point. Not many people outside of Star Wars Episode VII do.

But he isn't the ony “Game of Thrones” alum to be picked up by Abrams -- back in June, actress Gwendoline Christie was also added for (yes) an unspecified role in Star Wars Episode VII. The blonde 6’3” actress is also known on “Game of Thrones” for her exceptional swordfighting skills as the female warrior of Brienne of Tarth. Neither Syrio Forel or Brienne of Tarth have crossed paths in “Game of Thrones”, but considering they are both known for their swordfighting, wouldn’t it be funny if Christie and Yerolemou had somewhat of a reunion as they duel with lightsabers? I think it would be especially fun to se,e given the full foot of height difference between the two. Either way, with these latest additions to Star Wars Episode VII, I’m at the edge of my seat in even more anticipation of what great things it will hold!