Free Movie Tickets: How and Where To Find Them! 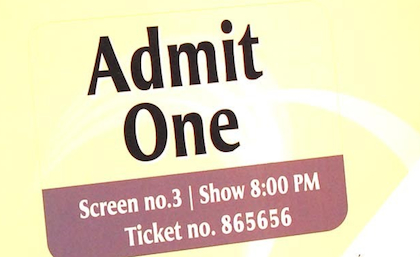 Dying to see one of those hot movie releases but can’t go? Low cash flow? Don’t worry, I got you!

With all the hot summer flicks hitting the theaters right now, it would be a shame to stay in. The excuse of not having cash is not a real excuse, because there are many ways to get in the movies for $FREE.99! And no, not illegally! Here are just a few ways to get to see your favorite films in theatres when you're low on dollaz:

1. Screenings: Go to screenings! Sign up with places likeNielsonMovieReview.com and watch movies before they hit the theaters! Best thing about it is you get another ticket for free after watching the free screening.  You get TWO films for the price of... NONE! But remember to RSVP and show up early, because it's first come first serve. But even if you don’t make it into the screening; no worries!  As long as you show up on time, you will still receive a ticket to use that day to a film of your choosing!

2. General Mills Cereal Boxes: Next time you’re out picking up a box of cereal, take a look at the box. Many General Mills cereals such as Cheerios and Coco Puffs offer free movie tickets. And it’s not like trying to win a prize on a radio station -- all you need is two of the codes from the cereal boxes that offer free tickets. Enter them online to receive a $12 value ticket. It’s easy as pie, so why not take advantage of this offer? I mean, if you’re a cereal person.

3. Donate Blood: Give a little blood. Stop by a blood bank, and in return, they will give you free movie tickets. Many blood banks can’t afford to pay everyone, but they can give out free movie tickets as rewards to those who donate their own liquid gold. Offer up some blood and watch the new movie Sex Tape for free!

4. Contest: One other great way to get into those theaters free of charge is the dreaded contest. Hey, you can’t win if you don’t play! Popular films with huge fan followings such asHarry Potter and Twilight would often have multiple events where fans could win free tickets. You can find contests like these through the movie’s fan base sight, Twitter, and on radio stations.

Don’t waste your summer moping about never getting to see the newTransformers film. Go get your free tickets!