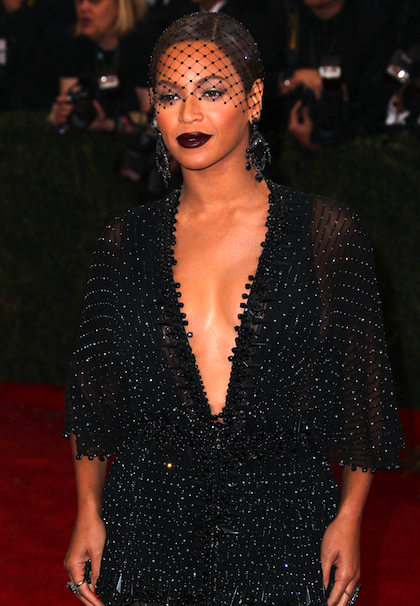 She's currently in the midst of what may be the biggest tour of 2014, but that didn't stop Queen Beyoncé from gracing us with a remix of her song "Flawless". Once again employing the usual element of surprise, the new version of "Flawless" came without a single warning on Saturday night.

The release of this track set the internet aflame -- causing an uproar on Twitter, trending #1 over international conflict, and crashing Beyoncé's website. It isn't difficult to see how it caused a frenzy; the track addresses something we've all been dying to learn more about... the infamous throwdown between Jay-Z and Solange in May after the Met Gala.

"We escalate up in this b*tch like elevators, of course sometimes sh*t goes down when there's a billion dollars on an elevator," spits Beyoncé.

Although she still isn't giving us too much detail, it's obviously enough to satisfy. Beyoncé has always been good about keeping the details of her private life private, but here she lets us know that, regardless of their wealth (or perhaps even because of it), she and her family have their fair share of problems too.

And of course, the remix features none other than Nicki Minaj, who dominates the second-half of the track with her rap. This is the first collaboration between the two divas, but if this is the type of outcome we can expect, then we want more from this flawless duo.

Adding to the intensity of this track, Minaj meshes well with Beyoncé, and together they combine their skills to create a message of female empowerment. They shut down all their haters with their statement of having control of their respective images in the media.

In her rap, Nicki talks about posting a flawless Instagram -- but unlike her perfect photos on the app, these lyrics have no filter. Some of our favorites new liners (in addition to all the original lyrics) include:

"I wake up looking this good and I wouldn't change it if I could."

"But tell 'em winning is my mother****ing protocol 'cause I score before I ever throw the ball."

Check out the new "Flawless" remix here and let us know what you think in the comments!