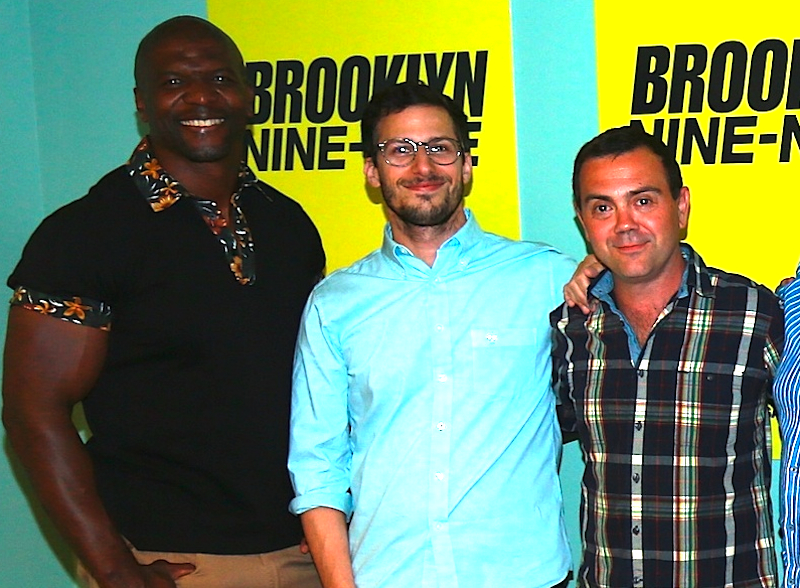 Yup, who doesn’t love a good crossover? It’s a classic television trope that I honestly believe hasn’t jumped the shark. It’s just fun. The last one I can truly remember was almost two years ago with “The Simpsons”/”Family Guy” crossover. There have been many in the past that broke the realm of TV worlds, like when “Boy Meets World” and “Sabrina the Teenage Witch” crossed over -- which meant that the sad, motherless, half-orphaned, bastaard Shawn Hunter lived in a world of magic much like Harry Potter, except the part where he isn’t The Chosen One and is completely non-magical.

Anyway, as we previously reported, this Fall, on October 11, tune in to Fox to watch the “New Girl”/“Brooklyn Nine-Nine” Crossover Extravaganza™! Watch as Brooklyn’s finest drag Jess Day (Zooey Deschannel) off the streets and into the precinct where they will question her on just exactly who is that girl? So far what we know about the episodes are the titles and setting. The two-episode event will be called “Prank Sinatra” (“New Girl”) and “Terry Titties” (“Brooklyn Nine-Nine”), and both will take place in Brooklyn.

What this all means most likely is that Jess will be returning to the land of her hipster forefathers and mothers to see just how they live on the constantly-walking-and-subway-riding Big Apple, as opposed to the exhaust-pumping smog paradise of Los Angeles. Plus, it’s probably easier to justify a trip to NYC with a group of 30-something roommates (but I’m pretty sure Scmidt can live on his own at this point). Although I am hoping for a Die Hard-type of crossover scenario with “New Girl” roommate and LAPD officer Winston (Lamorne Morris) stuck in the middle of a terrorist attack by former Mom & Pop shop owners trying to take back their neighborhood from hipsters and, of course, use Coors Lite pipe bombs, red meat, gluten-filled sandwich scare tactics, and Dunkin Donuts as a terrorist takeover!

In any event, this sure sounds like it will be a lot of fun, but it makes me wish that more shows would do this today. Think about what would happen if, say, they crossed over “Grey’s Anatomy” with “Children’s Hospital”. The results would be hilarious enough to the point where I think the “Grey’s Anatomy” people would look more insane, but the setting would have to be at the original Children’s Hospital in the slums of Brazil complete with footage from this year’s Olympics. Heck, I would even sell out and take the long awaited crossover of “Stranger Things” and “Orange is the New Black”, where we see the real monsters are actually the United States prison system. Or how about we get FX to scrap the whole crossover thing together and have the next “Fargo” season ditch the mid-west back drop and just take place in Philadelphia so we can put the “It’s Always Sunny” crew front and center for the whole season and kill them all off as a means for a series finale nobody will ever forget? I mean, Dennis (Glenn Howerton) was already killed in Season 1 of “Fargo”, let’s end the actual Dennis in style.

So many options are out there today, but instead of wishing for some, let’s get excited for the one coming to Fox this Fall and all tune in on October 11 to see what “New Girl” and “Brooklyn Nine-Nine” will have to offer us. Until then, let’s just speculate once more on a crossover and hope we can see “Rick and Morty” meet up with “The Simpsons” one day. Oh, wait! That totally happened and ended in about two and a half minutes!