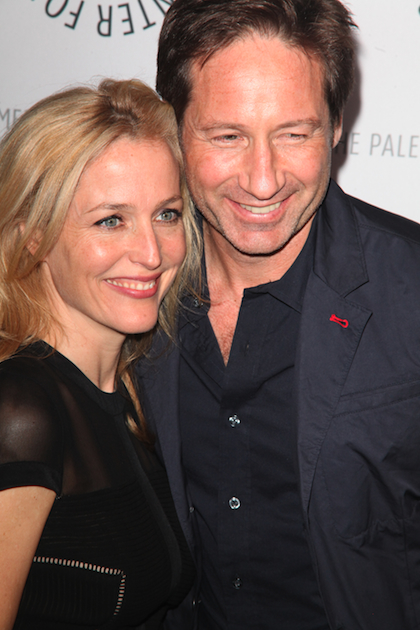 Gillian Anderson and David Duchovny are reuniting yet again, but not in the way fans would expect. Separately, the ex-“X Files” co-stars have dabbled into writing novels. I will start off by saying that both of these books are completely different from each other. The only factor linking the two books is that the authors once worked together on a science fiction television show. Soon you will see how different these books actually are.

Anderson, who played Special Agent Dana Scully on the “X Files”, is writing a book entitled A Vision of Fire, which is due out this fall. The story is about a top-notch child psychologist, Caitlin O’Hara, who is hired to figure out why the United Nation’s Ambassador to India’s daughter is speaking in tongues. Caitlin goes into the case similar to the way Dana Scully would (and probably anybody this would happen to in our non-fiction universe), believing that there will be a clear-cut answer to this behavior and won’t possibly find a supernatural presence being the cause. Well, Caitlin gets that wrong, as across the world, kids start drowning on dry land and setting themselves on fire. Sounds a lot like the “X Files”, right? News of Anderson’s book comes out about a month after her ex-co-star announced his own book. Is this some strange coincidence? The only explanation is that they mostly likely share some sort of joint collective consciousness...

Duchovny’s book, Holy Cow: A Modern-Day Dairy Tale, is due out in February of 2015, and, boy, could it not be any more different from A Vision of Fire. Also unlike Duchovny’s counterpart on the “X Files”, Special Agent Fox Mulder, this book sounds like it has nothing to do with aliens and/or one’s unrelenting obsession with them. Holy Cow: A Modern-Day Dairy Tale follows the trials and tribulations of a wise-cracking cow named Elise Bovary. Elise enjoys a life of leisure and flirting with neighboring bulls. She learns about industrial meat farms, and her sense of reality is complete shattered. With the help of a cranky Torah-reading pig named Shalom, and Tom the turkey (who possesses the ability to use an iPhone with his beak, as well as a need to give out medical advice in a German accent), Elise leads her new friends onto a plane so they can escape to a safer world. Somehow, Shalom unites the Israelis and the Palestinians. Science fiction, fairy tale or dairy tale, either way, this novel sounds insane in the best way possible.

There it is. Two completely different books written by two Hollywood stars that will forever be linked together by fighting aliens. This sounds more “Twilight Zone” than “X Files”, but still really cool. I’m sure both books will sell well inside and outside of the cult fandom of the “X Files”. But what do you think? You excited for the release of these books? Does one grab your interest more than the other?