'Flowers In The Attic' Remake Poses Some Dilemmas 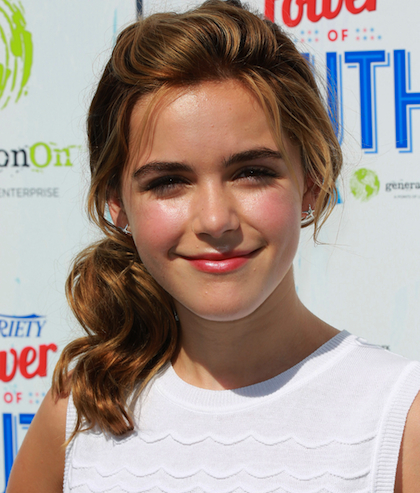 Back when peeps of my generation were kids, the book Flowers In The Attic was basically our Fifty Shades of Grey. The notorious V.C. Andrews novel, which was first published in 1979, titillated hormonal tweens and teens throughout the ‘80s with its sordid and taboo tale of four young siblings who are imprisoned by their sadistic grandmother in the attic, the eldest two of which (Cathy and Chris) actually end up hooking up. WHAT!?

Our fantasies came to life (kinda) when a film version was released in 1987, starring the then red-hot Kristy Swanson as Cathy, but as I recall, it was pretty sanitized. While there was some sexual tension between the blond and beautiful elder siblings, nothing actually happened. Considering that was the main selling point of the story, it was a real letdown. But on the other hand, we can’t be too surprised, given the subject matter. Some books just can’t be adapted for film.

OR CAN THEY?? Well, someone over at Lifetime sure thinks so! The cable network is well on their way to giving it another go, with the main characters having been cast – and I have to say, this could get weird!

Heather Graham has been cast as the children’s widowed and oblivious mother, while the legendary Ellen Burstyn will play the mean grandma. So far so good! As for the brother-sister lovahs? Weellll, newcomer Mason Dye will take on the role of Chris, and our gurl Kiernan Shipka (best known as Don Draper’s daughter on “Mad Men”) has been tapped to play the heroine Cathy. She’s only 13. I told you this could get weird. While that’s way closer to the age of the character in the novel, it still poses some major questions as to how the subject matter will be handled given her tender age. Now, young actresses in controversial roles is nothing new (Brooke Shields, Linda Blair, Jodie Foster, Dakota Fanning, and Milla Jovovich can all attest to that), but it still poses a HUGE risk for all those involved. Not incidentally I’m sure, the film will be directed by a woman (Deborah Chow) and was also adapted by a woman, so young Kiernan will likely be in good hands. It’s one thing to read the book in the safety and privacy of our own bedrooms, but to actually sit and WATCH the events unfold in a movie is something else entirely. But on the other hand, devotees of the book are gonna expect some authenticity. So, what's one to do??

At the end of the day, maybe this truly is one story that’s best left to the printed page…

Check out our chats with Kiernan at the YH Studio below, and see if you can stomach seeing her in this role!