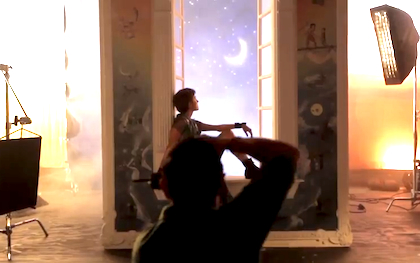 Growing up as a '90s baby, Peter Pan was/is my ALL TIME favorite movie. (The 2003 live-action version, not the Disney cartoon.) My love for this film isn’t just about the hottie Peter Pan himself (isn’t he just so dreamy?), it is the overwhelming presence of pure magic. All children at some point don’t want to grow up, and because of this movie, I’m able to relive the enchantment over and over again. Now, NBC’s live version is coming up quickly and I’m SO excited to see it!

NBC announced on last week that "Peter Pan Live!" will be airing December 4th, with Craig Zadan and Neil Meron producing while Rob Ashford is directing, all three of whom were behind last year's successful broadcast of "The Sound of Music Live!". The telecast, starring Carrie Underwood as Maria Von Trapp, was a big hit for NBC, attracting more than 18 million viewers (not bad, not bad). For this upcoming broadcast of "Peter Pan", Allison Williams stars as the titular Boy Who Wouldn't Grow Up, while Christopher Walken stars as Captain Hook. Other cast members will include Christian Borle as Mr. Darling and Smee (taking a step away from tradition by having the same actor play Wendy's father and Hook's bo'sun, as opposed to Mr. Darling and Hook usually being played by the same actor), Kelli O’Hara as Mrs. Darling, Taylor Louderman as Wendy, Alanna Saunders as Tiger Lily, Jake Lucas as John Darling, John Allyn as Michael Darling, and Caitlin Houlahan as Jane (what an exciting and impressing cast!).

The promo is full of fake wind, mischievousness, and intense suspense-building music! The anticipated musical will obviously not be pre-recorded to grace our screens, so the video above features clips of the stars on set. When I first watched this, I saw myself as a little girl, looking up at the TV screen wishing I was Wendy. Neverland is such a desirable and magical place (if only it were real!). I’m anxious to see how they’ll portray it in a studio...

As stoked as I am about this premiere, I’m a BIG believer in the entertainment industry leaving classics alone (unless they can create a remake that is better than the first, which is rare). However, because this is going to be a live production, I think it has a really good shot of pleasing audiences everywhere! I can admit, with staged productions, there’s always fear (that it won’t do well) and humor (that it won’t do well), but I have faith in this one!

So guys, if you haven’t seen the promo, what are you waiting for?

And don’t forget to set your DVRs, because "Peter Pan Live!" will air just ONE MONTH from today, at 8pm on Thursday, December 4, on NBC!