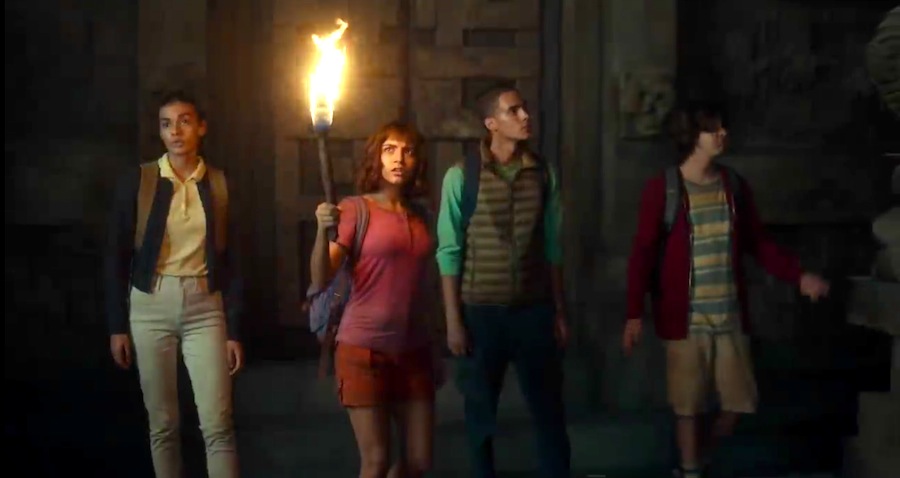 Let’s not pretend we all didn’t grow up with Dora the Explorer’s voice constantly on the TV, taking us on bilingual adventures and warning us against the dangers of kleptomania. Well, Dora’s back, and this time she’s a real live girl!

That’s right, Dora is getting her own full-length, live-action movie and the trailer is teasing one heck of a wild ride.

Isabel Moner, who got her big break on Nickelodeon's "100 Things To Do Before High School" before starring opposite Mark Whalberg in Instant Family, is taking on the lead role of Dora, a teenage explorer forced to attend traditional high school when her parents set off on a mission without her. And just wait until you hear who her parents are! The legendary Eva Longoria will be playing Dora’s mother alongside Ant-Man's Michael Peña as Dora’s father. I mean, name a more iconic parental duo, I’ll wait.

Dora’s parents inform her that they’re off on a mission to uncover a lost city made of gold… and unfortunately Dora is not invited. Instead, she’s sent to live with her aunt, uncle, and cousin (I see you, Diego) so that she can have a "normal" high school experience. Sadly, things don’t always turn out how we want them to, especially since Dora is a girl who carries a whole lot of weapons with her.

It’s not long before Dora, Diego, and 2 of their classmates are kidnapped and taken hostage by some very dangerous men who are on the hunt for Dora’s parents. And thus the motley crew of kids sets out in the jungle to find Dora’s parents and maybe just uncover an ancient civilization while they’re at it.

Of course, Dora’s trusty sidekick Boots is never far behind, but we have yet to see if Swiper will land a role in Dora’s feature debut.

Dora and the Lost City of Gold will be in theatres everywhere on August 2, it looks like it’s time to revisit our glory years!

In the meantime, check out Isabela's visit to the Young Hollywood Studio where she told us all about landing this iconic role!