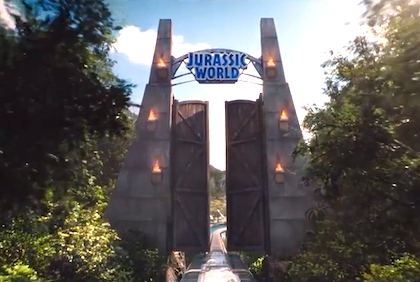 It’s been over 20 years since we first heard the late great Richard Attenborough speak those famous words in Jurassic Park. I remember that was about as far into the movie that my mom would let me watch, since I was three and obsessed with dinosaurs when it came out. Well, now the jokes on you, Mom! I’m 24 and on my own now, and I can stay up as late as I want looking at pictures of dinosaurs, eat ice cream for breakfast, talk to girls and not worry about their cooties, and watch all the PG-13, action-packed, dinosaur-themed entertainment I want! Unfortunately, there haven’t been too many action films involving dinosaurs… until now.

The much-anticipated Jurassic World, which is the fourth Jurassic Park film, is premiering in theaters on June 12, 2015 starring Chris Pratt and Bryce Dallas Howard. Universal Pictures released the first 20-second (well, more like 10-second) teaser trailer over the weekend:

THAT WAS INCREDIBLE…ly brief. Luckily, the full Jurassic World trailer will be premiering this week during Thanksgiving Day football on NBC. That will put it during the Seahawks vs. 49ners game, which starts at 8:30PM ET / 5:30 PT. Everybody else in America, you’re on your own.

Speaking of secret trailer premieres, this week we will also get our first glimpse of Star Wars: The Force Awakens. Well, it’s a secret that’s not such a big secret, like ordering your McDonald’s meal balled up. (If you don’t know what I’m talking about, ask the cashier the next time you order a meal to ball it up, and be sure to tell ‘em Ronald sent you!) To see the trailer for Star Wars: The Force Awakens, go see Big Hero 6 in theaters this Thanksgiving weekend. Word around the galaxy is that the trailer, for now, will be strictly shown in theaters… but no doubt something will be on YouTube by Monday.

I hope you’re all excited for these first looks into a new chapter into two different franchises, which, oddly enough, were separately started by BFFs Steven Spielberg and George Lucas. Is there a trailer that you’re more excited to see? Leave a comment below!