First 'Into the Woods' Trailer Features Many Wishes, No Music (Yet) 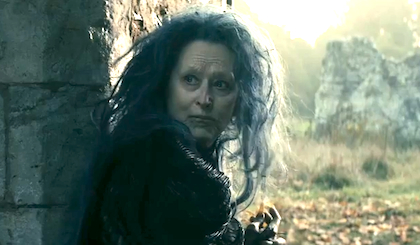 What's your favorite fairytale? There's the story of Goldilocks, Little Red Riding Hood, Cinderella... and so many more. So if you're anything like us, you know how hard it is to choose just one!

Luckily for us, we won't have to choose just one of our favorites in the upcoming Disney film Into the Woods. Directed by Rob Marshall, this adaptation of Stephen Sondheim's beloved musical incorporates tales from the Brothers Grimm -- with a modern twist.

Interestingly enough, the trailer does not incorporate any songs from this musical.

It seems like Hollywood has grown a liking for turning musicals into films. Over the years, we've seen success in these adaptations with movies ranging from The Sound of Music and Chicago to Phantom of the Opera, and Les Miserables... with varying results.

Sondheim expressed his approval of his musical's adaptation by saying in a statement: "Coincidentally, I saw it immediately after leaving the meeting, and, having now seen it a couple of times, I can happily report that it is not only a faithful adaptation of the show, it is a first-rate movie."

Into the Woods is set for release on Christmas day.